You'll roux the day if you skip the crème brûlée 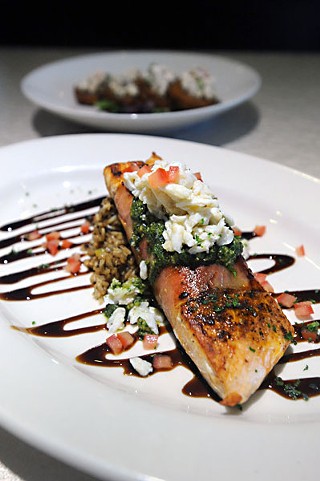 
The most important thing to remember when dining at the French Quarter Grille is to pace oneself and save room for dessert. Don't get me wrong – based on our recent sampling of the various examples of the Cajun/Creole culinary canon featured on the menu here, everything from humble gumbos, étouffées, and po'boys to elegant entrées bathed in sophisticated sauces are well-executed and satisfying. It's just that the food is rich and the portions more than generous, and one of the desserts waiting at the end of the meal is truly worth some early meal discipline. More on this later.

We recently visited French Quarter Grille for both lunch and dinner and learned that former Mama Roux employees Scott Stolle and chef Davey Gore have created a restaurant that is much more than an homage to their mentors Michael and Yoli Amr. The interior has a new coat of paint, and the kitchen has been opened up so that the culinary magic wrought by Gore and his staff is visible to diners. Folk art murals and Mardi Gras masks evoke the French Quarter, and the unobtrusive soundtrack is the blues. The ambience is friendly and welcoming, and Stolle's well-trained floor staff can answer any questions diners might have about the menu. These experienced hospitality pros will make you feel right at home and feed you well. Meals begin with baskets of warm rolls paired with the house herb butter, but as delightful as that sounds, my advice is to forgo the bread and save room for dessert. Our recent lunch began with crawfish beignets ($8.95) and fried green tomatoes ($8.95), and the tomatoes were the clear winner in that competition. Thin slices of green tomato are lightly coated in a crisp batter and then topped with a cool serving of creamy crab rémoulade. The layered contrasts of hot and cool, crisp and creamy, tangy and sweet complemented each other beautifully and managed to outshine the heavier beignets, which suffered from too much dough per crawfish tail. I chose that day's lunch special and was rewarded with a perfectly prepared fillet of crusted catfish topped with huge blackened shrimp ($15.95), paired with dirty rice and black-eyed peas. The fish was moist and flaky under a mantle of crunchy coating, and the sweetness of the big Gulf shrimp made a good foil for the fiery blackening spices. My friend thoroughly enjoyed her order of shrimp and crawfish pasta ($13.95), but the combination of seafood and cheese tortellini in a Brandy-cream sauce struck me as too rich for a midday meal.

Stuffed as we were, our mission couldn't be considered accomplished until we'd tried dessert, so we went with the croissant bread pudding ($6) and orange-infused crème brûlée ($6) suggested by our knowledgeable server. Both dessert portions are ample enough to share, especially the decadent bread pudding: a warm, tender mound of croissant pieces bathed in both caramel and chocolate sauces and then crowned with a scoop of vanilla-bean ice cream. While the bread pudding is over-the-top luxurious, the silken crème brûlée is dainty and restrained under its lacy sugar crust, with the delicate floral aromas of orange and vanilla bean perfuming each addictive bite. This dessert is not to be missed and well worth a visit to the restaurant all on its own.

When other friends joined me to check out French Quarter Grille's dinner menu, I knew to warn them to pace themselves in anticipation of a stellar dessert experience at the end of our meal. We started by sharing a crab cake ($11.95) resting atop fresh, tangy coleslaw and a cup of crawfish étouffée ($5.95). The crab cake is packed with sweet lump crab meat. Once again, the contrast of a warm dish in a crunchy outer coating paired with a cool, creamy accompaniment of crisp vegetables proves to be a winning combination. The étouffée with its peanut-butter-colored roux is hearty and filling, with herbal notes at the beginning of each bite and a tongue-tingling cayenne finish.

While French Quarter Grille could be described as a Cajun/Creole seafood paradise, the menu also features beef, pork, and chicken entrées. One of my guests was delighted with her choice of the French Quar­ter Salmon ($20.95) topped with sweet crab meat and nutty pesto, and our other companion was equally pleased with the Chicken Benjamin ($17.95), tender chicken breasts topped with crispy prosciutto and melted Swiss cheese. My Blackened Rib Eye Pontchartrain ($29.95) arrived medium-rare, as ordered, under a mantle of plump shrimp and flaky crabmeat in a sophisticated mushroom-cream sauce. Gore's attention to detail is evident on each plate – the presentation is appealing to the eye as well as the palate, and even the simple side dishes of mashed potatoes and sautéed cabbage are exemplary.

When it came time for dessert, we ordered both house versions of crème brûlée: the aforementioned orange-infused selection as well as a chocolate-raspberry version. I was well aware that both my friends are chocolate fiends, and I was curious to see which crème brûlée would emerge as the favorite at our table. The texture of the raspberry-chocolate custard is denser than the orange, perhaps more velvet than silk, and the rich flavor reflects the use of a high-quality chocolate. However, the seductive orange-scented custard flecked with vanilla beans was once again the favorite. This is a dessert I'll remember all year. When I spoke to co-owner Stolle about his concept for the French Quarter Grille, he made it clear that while he and Gore wanted to honor the memory of their mentors, their intention was to create a restaurant that was uniquely their own. I think this marvelous signature dessert is emblematic of their success in that endeavor. Bravo!