Many of the people who shop at the biweekly Boggy Creek farm stand or attend the various events held on the shady grounds probably have no inkling of the bucolic acreage's historic significance. Urban farmers Larry Butler and Carol Ann Sayle, the current stewards of the farm that dates back to the Republic of Texas, bought the vacant house and five weedy acres in 1992, moving in the day after the sale closed. They've lived and farmed there ever since. Sayle has always said that one of the most compelling aspects of their stewardship of the farm has been researching its rich history. In the early days of their residency, the couple spent Sunday afternoons and rainy days poring over the treasure trove of historical information at the Barker Texas History Center on the University of Texas campus as well as the Travis County archives and the Austin History Center, gathering bits of information like so many pieces of a historical jigsaw puzzle. They discovered that the original 50 acres were purchased as a homestead in 1839 and that the land had belonged to two longtime Austin families before they bought it 19 years ago. Much of the history they've pieced together is posted on the farm's website at www.boggycreekfarm.com.

Butler and Sayle's extensive research reveals fascinating facets of early life on the farm and raises some questions with no definitive answers: When the house was built, and by whom? The city of Austin historic designation for the house lists the date as 1854, but that was a guess, at best. Butler and Sayle contend the house was built much earlier, and they have their own speculation about a possible builder. The house has the same floor plan as a similar Greek Revival home at the French Legation, and their research reveals that the original owners did business with master builder Abner Cook, as well as two of the French Legation's residents, French Ambassador Alphonse Dubois de Saligny and Dr. Joseph Robertson. While we still can't say for sure who built the Boggy Creek farmhouse, an amateur genealogist researching her own family's relationship to Robertson recently revealed a connection between what is now Boggy Creek Farm and Republic of Texas President Sam Houston. A letter written by Houston to his wife bolsters the contention that the house already existed in late 1841, making it the oldest surviving house in Austin. To fully understand the importance of this newest piece of the jigsaw puzzle, we have to look back at the two main families who owned the farm for the longest periods of time: the Smiths and the Siegmunds.

Southerners James and Elizabeth Smith and James' two sons from a first marriage followed entrepreneur Stephen F. Austin to Texas in the 1830s. The wealthy couple settled in the thriving metropolis of Bastrop in 1838 and began buying properties in the new city of Austin the next year. At a city auction in 1839, they bought four lots (50 acres) three miles east of Downtown for a homestead. The Smiths resided on the property until January 1845, when James Smith was mortally wounded in a confrontation with a "villainous overseer." In the 40 hours it took James Smith to die, he was attended by Robertson (who also delivered the last of the Smiths' children) and dictated a deathbed will leaving 400 acres of farmland to his eldest son, Alfred Smith. The will was witnessed by early Austin notables Aaron Burleson and James H. Mat­thews. Abner Cook built James Smith's coffin.

After Smith's untimely death, Eliza­beth and her young children moved to a house the family owned in Downtown Austin. Elizabeth eventually contested the deathbed will, contending in handwritten probate court documents that she had brought substantial wealth into the marriage and was by then a widow with five children to support. Alfred Smith countered with details of all the work he had done for his father's estate, including the fact that he had overseen the building of the homestead during the winter of 1840-1841 – which provides the first clue as to the actual age of the house. A subsequent probate court filing in 1854 deals with son James H. Smith's lawsuit asking for a larger portion of the Smith estate, and it is likely those court papers were used to establish the date of the house for the city's historical designation. Despite all the lawsuits, Elizabeth Smith retained ownership of the farm property until she willed it to her daughter, Mary Elizabeth Smith Matthews, in 1874. The farm was sold by Mary's son Eric Matthews in 1885, and then changed hands several times until it was bought in 1902 by Frank Sieg­mund, the son of German immigrants. German stonemason Joseph Siegmund bought property at Pine Street and East Avenue (now the corner of East Fifth and the southbound I-35 access road) in 1862 and built a three-story stone building on the property. The first two floors housed his stonemasonry business, and the Siegmund family lived on the third floor. (In the late 1940s, that stone building would become the El Matamoros Mexican restaurant, famous for its puffy tacos.) Siegmund family lore holds that Joseph's oldest son, Frank Sieg­mund, used his share of the proceeds from the sale of that building to buy the property now known as Boggy Creek Farm in 1902.

Frank and his wife raised a family at the farm and grew vegetables there until the early Twenties, when they moved to South Austin. A family named Lancaster leased the farm from 1923 until 1937, when Frank's daughter, Bertha Siegmund Linscomb, and her family took up residence there. The Linscombs lived at the farm until Bertha's death in 1979, when her husband sold the house and the final remaining five acres to liquor store owner and history buff Don Wiginton. Wiginton secured historical designation for the farm house, although the 1854 date for it is now thought to be an error. He lost the property to foreclosure in 1991, and Butler and Sayle bought it in 1992.

Sayle tells the story about looking up from work one day in 1997 to see two women making their way up the farm driveway. The older of the two women identified herself as Marguerite Siegmund Sherrill, said her grandfather had once owned the farm, and asked if she and her daughter could look around. Sayle invited them to make themselves at home and struck up a friendship with Sherrill and her daughter, Susan Estes, which led to the Siegmund descendants holding family reunions at the farm in 1997 and 2011.

Late last year, amateur genealogist Estes was doing online research about her family connections to Robertson when up popped a letter written by Houston to his beloved wife, Margaret. The letter is dated Dec. 24, 1842, (now believed to be a transcription error), and appears in The Personal Correspondence of Sam Houston 1839-1845 (written by Sam Houston and edited by Madge Thornall Roberts). Along with florid declarations of love for his wife, Houston also includes the description of his recent attendance at a wedding and subsequent wedding supper at a home in the country. He writes: "Mr. Smith the Bridegroom was a genteel man and well to do. The Bride was a pretty being (nearly). ... Today I dined at his Fathers with the wedding party & many others from this place ... and the 'eating doings' were first rate."

Through careful reading of the letter's footnotes, Estes discovered that the marriage was that of Alfred Smith and Nancy Mills, and the bridegroom's father was James Smith, the original owner of what would become Boggy Creek Farm. She then researched Travis County records to confirm that a marriage license was issued to Alfred Smith and Nancy Mills in December 1841 and shared the news about the Houston letter with Sayle, generating great excitement. The letter further establishes James Smith's connections with prominent Texas historical figures and appears to bolster Butler and Sayle's contention that the farmhouse was built in 1841, making it possibly older than the French Legation, the first sections of which were completed that same year. Though Sayle has yet to post a transcript of the Houston letter on the Boggy Creek website, she did include it in a fall presentation about the farm at the Neill-Cochran House Museum.

Sayle also shared the story of the Houston letter with Foodways Texas Director Marvin Bendele, as well as farm-to-table advocate and East Side Show Room chef Sonya Coté, who were so taken with the story of Houston dining at the farm that they're cooking up a Sam Houston dinner to be held at Boggy Creek as part of Foodways Texas' annual symposium in Austin in late March 2012. Coté is researching foods that would have been available in Texas in the 1840s, and it's a safe bet that the "eating doings" at the March dinner would impress even President Houston himself. Eventually descriptions of that dinner will become another piece of the jigsaw puzzle that is the rich history of Boggy Creek Farm. 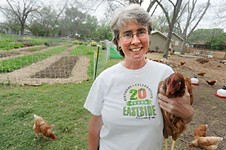 East Austin Urban Farm Tour To Benefit Farm and Ranch Freedom Alliance
Oh, the farmer and the foodie should be friends