Jettison your DiGiorno: Bola Pizza comes to your freezer

It could be that Bola Pizza is the best new frozen food product developed in Austin since the Night Hawk Top Chop't Classic steak dinner. Christian and Jamie Bowers imported a portable, wood-fired Italian pizza oven and started Bola Pizza strictly as a catering company a little more than two years ago. Bola made such a favorable impression at the Green Corn Project fundraiser in October 2010 that Sustainable Food Center's Farmers' Market Director Suzanne Santos recruited them to serve pizza at the Downtown Farmers' Market. Once Christian had all the necessary city permits to serve pizza at the market, Bola breakfast pizzas (local cheddar cheese and thin slices of speck ham plus one or two local eggs sunny-side up, $12-14) became the best way to start or finish a morning of shopping Downtown. As its popularity grew, entrepreneurial types and real estate developers began to approach Christian with ideas about opening a brick-and-mortar location, and he gave all the proposals serious consideration. However, the idea for a line of frozen pizzas was always in the back of his mind, and in the end, that was the direction he chose. After a few months of research and development, three new Bola frozen pizzas – Truffle Daisy, the Godfather, and Polka Dot – rolled out earlier this month. The pizzas are par-baked to give the crust a distinctive char, then flash-frozen and wrapped in plastic before being sealed in an authentic pizza box. All the pizza-loving customer has to do is thaw, bake for a while at 450 degrees F, and enjoy! The sample I received was a big hit around here. Bowers gave Farmhouse Delivery a two-week exclusive on the first batch of frozen pizzas but has just added Greenling and Royal Blue Grocery to his stable of vendors, with more to come soon. Whole Foods has shown strong interest in carrying Bola Pizza, and we'll keep you posted when and if it picks up the product.

I was too busy making desserts for the Chronicle holiday party a couple of weeks ago to attend the gala opening celebration for the new event venue at the Commodore Perry Estate (East 41st Street and Red River). The lovely Hyde Park estate has always fascinated me, and I even provided desserts for some catered events there in the mid-1980s. We're told that new owner Clark Lyda has given the stately mansion, grounds, and many outbuildings a respectful restoration, with more work to come. As busy local caterers will tell you, there's always a need for another attractive party venue in the central city. I can't wait to see it!

Producers of The Food Network's cooking competition show Chopped are looking for expert grill masters who would like to compete in a special Chopped grilling championship to be held in Tucson, Ariz., March 6-10. Potential contestants should have great grilling skills and a real passion for cooking over fire. There will be four rounds of preliminary competition in which contestants must prepare dishes from foods in mystery baskets; the winners of those rounds will compete in the final for a $50,000 grand prize. Look for the official application at www.choppedcasting.com. Austin has got to have some potential winners – chefs John Bullington and Paul Petersen, this is definitely in your wheelhouses!

The Sustainable Food Center's Downtown Farmers' Mar­ket combines with the Sunset Valley Artisan Market this Saturday, Dec. 24, for a Christmas Eve shopping extravaganza from 9am to 1pm. As always, admission is free, and there's plenty of free parking in the Toney Burger Center parking lot. The Downtown market will be closed this one week, so plan on shopping at Sunset Valley. 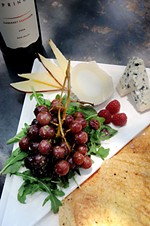 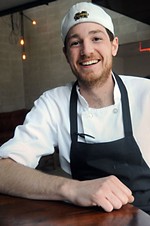 Go or No Go?
No Va is a promising addition to the Rainey Street District 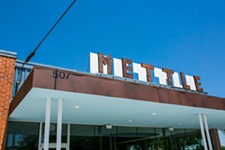