Chef Tyler Johnson, formerly of the food trailer Along Came a Slider, isn't playing around when it comes to delivering on the titular promise of his hip, pig-centric eatery, Bacon. The new hot spot, opened in Septem­ber, occupies the little frame house on 10th Street where the Screaming Goat resided until June of this year. Like any new restaurant, Bacon has some quirks and inconsistencies to work out, but the staff appears to have made great strides helping Johnson realize his culinary vision of all things pork belly.

My family and I made our first visit for breakfast on a weekend morning, just in time to beat the hangover-recovery crowd that began to straggle in as we got our food. Our breakfast order was fairly simple: chicken and waffles ($9.95) and biscuits with bacon gravy ($4.95), and the flavor profiles of the two orders were like yin and yang. Where the simple, sweet waffle was topped with a tender, perfectly cooked boneless chicken breast, the unremarkable drop biscuits were smothered in a bland bacon-cream gravy that badly wanted salt. 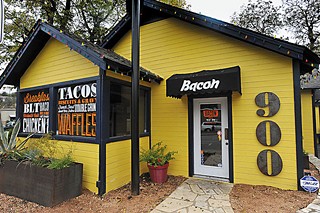 When some friends and I returned for lunch a few weeks later, the restaurant had made a few changes to its menu, adding a Reuben sandwich and reducing the price of its single serving of bacon from $1.95 to a much more reasonable $1. We selected the corn fritters ($3.95) and bacon fries ($5.95) for starters. The bready, deep-fried fritters, beautifully seasoned and generously studded with fresh corn, were an enormous hit. The accompanying bacon aioli was tasty but broke and melted rapidly; this was no great loss. The fritters stood alone without any need for sauce. The bacon fries comprised a generous mound of slender fries topped with shredded cheese, bacon, sour cream, and chives. A reassuring pile of comfort food indeed, yet the bowl they were served in made for an uneven distribution of toppings. Serving them on a plate would ensure that diners aren't left with a sad, gluey mess of cold, oily fries after excavating the initial layer of salty, fatty goodness.

We ordered an assortment of salads and sandwiches for our mains. Because it was brand-new to the menu, the bacon Reuben sandwich ($9.95) was a must, and we were not disappointed. An enormous portion of pork belly stands in for the traditional corned beef or pastrami in this otherwise standard deli staple. It was delicious (but definitely not kosher!) and was hands down the star of the show. The bacon wedge salad ($7.95) includes a gorgeous slab of Romaine lettuce, perfectly chilled and generously garnished with bacon and halved cherub tomatoes. Despite much positive chatter about the Double Grind ($9.95) – a half-pound burger containing a blend of ground steak and bacon – the unanimous assessment was that it was an absolute salt bomb. The desserts offered that day were bacon apple pie and candied bacon ice cream sandwiches, but we were too full due to the extremely generous portions and our absolute inability to pace ourselves.

When we returned for dinner, my husband and I both got variations on the chicken BLT ($9.95). He opted for the fried chicken paired with the hickory bacon, while I chose grilled chicken and Old Bay bacon. The sandwich came on thick slices of Texas toast, but with the chicken breast plunked on top of a heap of bacon, it became unwieldy, necessitating a knife and fork. I really enjoyed the Old Bay-seasoned bacon; it made me weirdly nostalgic for summers I never spent on Cape Cod.

Because I was determined to sample some sort of sweet on this trip, I took special care to inspect what was offered. There were pastries on the counter, and a lone bacon doughnut from earlier in the day coagulating unenticingly under a glass dome. The only other dessert option was a chocolate ganache bar ($1.95) that looked like a large Kit Kat segment studded with bacon. While I was pleasantly surprised by the balance of flavors between the high-quality chocolate and the bacon, I was disappointed by the selection. While part of the fun of Bacon is the now-you-see-it, now-you-don't nature of the daily specials, it would be nice if there were one signature dessert on the menu that regular diners could count on.

Over the course of several weeks, Johnson has demonstrated increasing inventiveness and creativity in the various ways he has illustrated the eponymous ingredient's versatility across the menu. This speaks to Bacon's potential to grow beyond a mere novelty restaurant, but it has yet to fully hit its stride.