The maestro of fried catfish returns to East Austin 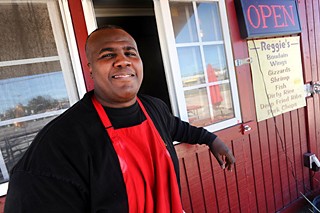 
For fans of Reggie's, which was located on Chicon for four years, these are happy times. Reggie Welton, the big chef with the bigger smile, has returned. He's now on the Southwest corner of Airport and Manor Road; you can't miss the red trailer surrounded by red and yellow pennants. Welton learned to cook back in Beaumont from his father, Pastor George Nobles. "He taught me how to make homemade barbecue links, boudin, gumbo, wild game, a true chili, you name it," says Welton. For church fundraisers, they would first catch all of the fish before they filleted and fried them. "When I would see the smiles of joy and hear the praises from the people about how good that fish really was and the freshness of it, it made all the hard work worth it."

With a culinary pedigree like that, it's no wonder Welton makes the best catfish in town ($7): fresh, crunchy, moist, and steaming, with a thin, spicy cornmeal crust. His lighter-than-air green-onion hush puppies are the stuff of legend, and his side dish of Cajun rice is perhaps the best dirty rice we have ever eaten. It's dirtier than most, loaded with meats and chicken giblets, and seasoned with cayenne, chicken fat, and the Creole holy trinity (celery, bell pepper, and onion, as well as garlic). His plump, spicy, rich homemade boudin ($3.75) is excellent as well, almost a meal in itself.

Welton serves deep-fried pork ribs ($8); the light, golden crust seals in all that pork flavor, ditto for the fried pork chops ($7). His mastery of frying also carries over to the chicken wings ($7). We shouldn't have been surprised by the taste and quality of the huge, juicy cheeseburger ($6), but this is no throwaway menu option. There are no losers on Welton's menu, and we can't wait for him to start making his homemade barbecue links. Through December, he'll be coaching youth football on Saturdays, and the 7pm-3am shift on Fridays will come later, but if you, like us, wondered where Welton went, wonder no more.