This fall was definitely the time for festivals and competitions, both in Texas and elsewhere. I can report from experience that the Texas Craft Brewers Festival, which returned in September after a six-year hiatus, was a fantastic success, as was October's Austin Beer Week. Events like these are far more than just an excuse to drink – they're also about innovation and exploration, as many of the brewers unveiled new creations or brilliant cask-conditioned versions of old favorites. I'm already looking ahead to April 21, 2012, when the Central Texas Beer Festival is scheduled for the Austin Music Hall.

The national scene has smiled kindly on Texas, as well. Texas winners from the granddaddy of them all, Denver's Great American Beer Fest­ival, included:

A GABF medal carries prestige, but even those professional brewers might be envious of Corey Martin. The Round Rock home brewer was one of three winners in the Samuel Adams LongShot American Homebrew Contest – meaning his beer will be bottled and available nationally as part of the Samuel Adams 2012 LongShot Variety Six-Pack, which hits shelves in February. His Dunkel-style beer is named A Dark Night in Mun­ich because of a "staining" process in which he powdered roasted malts and added them early in the brewing. Martin no longer has to live in the shadow of his brother Kerry, who won a similar contest a few years ago sponsored by Saint Arnold Brewing and had his beer featured as part of the Houston brewery's Divine Reserve series.

As part of the prize, Martin got to fly to Boston and brew alongside Sam Adams founder and superstar brewer Jim Koch. "The difference between craft brewers and home brewers is ambiguous; sometimes all they need is a shot," said Koch.

"It's every home brewer's dream to turn pro," said Martin. "They'll have my face on the six-pack carton. I don't know if that's good marketing."

Since fixing the state's illogical and arbitrary beer laws failed at the Legislature this past spring, Jester King Brewery, Zax Restaurant, and distributor Authentic Beverage Co. have taken the courtroom route. They filed suit against the Texas Alcoholic Beverage Commission in federal court alleging, among other things that laws that prevent microbreweries from selling on-site and brewpubs from selling off-site are discriminatory in favor of wineries and out-of-state brewpubs, laws that prohibit breweries from listing the alcohol content of their beers on the bottles violate the First Amendment, and laws that require beer with more than 4% alcohol to be labeled "ale" also violate the First Amendment and force breweries to describe their products misleadingly and incorrectly. For more, see "Speak No Ale: Beer Men Sue for Free Speech," News, Oct. 28. 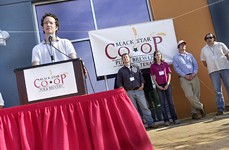