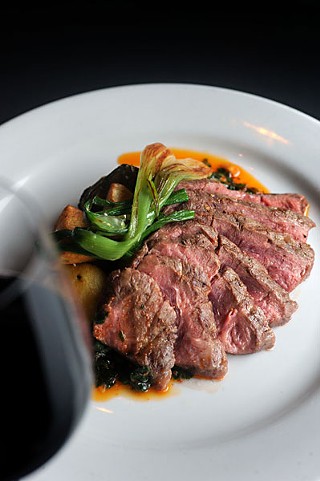 
34th Street Cafe, tucked into a little storefront on West 34th, a stone's throw from Seton Medical Center, has enjoyed a thriving lunch business for the last 16 years. Early on, the restaurant hit on a winning combination of excellent big salads, popular grilled sandwiches, premium iced tea, and gorgeous desserts, making it a favorite destination for Westside ladies who lunch, as well as doctors and other medical professionals from the surrounding health care complexes.

Earlier this summer, owner Eddie Bernal brought in chef Jason Tallent to revitalize 34th Street's evening menu, hoping to build up as loyal a dinner clientele as lunch enjoys. Educated at San Francisco's legendary California Culinary Academy, Tallent honed his craft at Dallas' Fog City Diner and such San Francisco destinations as Rose Pistola, Boulevard, and Jardiniere before he landed the job of executive chef at Globe. But the native Texan eventually could no longer resist the desire to return, and he and his wife relocated to Austin. Bernal picked Tallent from a group of six finalists based on his ability to go into the walk-in and prepare a three-course meal from what he found. Ever since he took the helm this summer, Tallent has been bringing the cafe up to date, easing its reliance on national purveyors and changing the focus to the exponentially more vibrant and intense flavors of freshly picked, locally grown ingredients. He has also been slowly shifting the dinner menu over to seasonal dishes made from sustainable meats and seafood.

"I don't even know how to not cook seasonally anymore!" laughs Tallent. "Of course, in California it is a lot easier to supply your restaurant from local farms; at Globe, I think 95 percent of what we served was locally sourced. What with the drought and the sharply defined growing seasons, we're having to make the move more gradually here in Texas."

Although the move to sustainable local sourcing is belated (I can't think of any top-tier restaurants in Austin that don't buy a good percentage of what they serve directly from area farmers), it's never too late to improve on what is already a good thing. Nowhere is this more evident than in the new dinner menu salads. The Caesar salad ($6.50) is now a beautiful, entire heart of Romaine, dressed with a simpler, more classic Caesar dressing, and topped with a load of freshly grated Parmesan. Perched atop this vision is a freshly baked crouton bearing an entire white anchovy. The baby greens with shaved persimmon ($8) are even more stunning: farm-fresh baby greens layered with paper-thin slices of deep-orange persimmon, interspersed with candied walnuts and topped with a maple vinaigrette. Even though the portion was substantial, the effect was a salad so light it seemed almost weightless. "The best salad I have ever had!" said my dining companion. "It tasted like Christmas!"

The dinner entrées reflect Tallent's passion for exquisite food presented simply: the Strube Ranch Wagyu flat iron steak ($23) consists of thick slices of medium-rare, grass-fed beef arranged over perfectly roasted brussels sprouts and roasted, peeled chunks of Yukon Gold potato. A delicate olive oil and parsley sauce adorns the plate. "My heart is really in the Italian approach," says Tallent. "Let the food be the best meal you have ever had, not because the flavor is hidden by sauces, but because it is wonderful food."

The two desserts I enjoyed at 34th Street Cafe, though neither were of Tallent's making, also deserve not a mention, but an absolute rave. The beignets ($7), available on the evening menu, are one of the most delightful desserts I've had this year. Hot, crisp home-made doughnuts, each about the size of a walnut, filled with tart, powerful lemon curd, float in a shallow bowl of cold, Earl Grey-infused custard. The contrast between the cold custard and the hot doughnuts is heavenly, and all the flavors are perfectly complementary. The other dessert, one I experienced while sampling 34th Street's dependably excellent lunch, was a slice of coconut cake ($5) so exquisite that it left me speechless. Light, moist, tender cake, layered with coconut custard, and frosted with an airy, meringue-based seven-minute frosting, it was as white as blinding snow and beautifully covered, as in a 1950s cookbook illustration, with grated coconut. The iced tea served at 34th Street at all times of day is Republic of Tea's Ginger Peach ($2.25), and its excellence is certainly worthy of mention as well. All in all, 34th Street Cafe is poised to be discovered (and rediscovered) as a destination Austin restaurant.