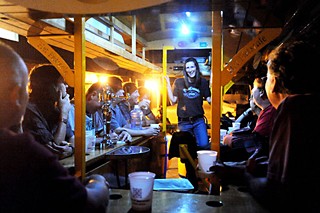 
On the other hand, it's pretty clear where PubCrawler of Austin will take you – it'll either steer you along a preplanned route or one that you customize, hitting a variety of Downtown drinking establishments. And whereas Bats & Beers ultimately seems driven by a noble purpose, PubCrawler just steers you toward silliness and a good time – powered by your own legs.

The PubCrawler, as you can see on the cover of this week's issue, is a vehicle. But it's much safer than using a car to pub-crawl – this one is pedal-powered, moves considerably slower than an auto, and has a sober company employee at the wheel and brake.

That driver – in our case, company co-owner Robin Lund – loaded us aboard, rang a bell, and yelled out, "Pedal, bitches!" We giddily submitted to her orders.

The Dutch-made vehicle looks absurd, and it is, which just contributes to the laughter (in between huffing and puffing) of the drinkers that power it. It's really a rolling bar, with 12 "bar stools" and a bench. Ten of the bar stools have pedals underneath, about the number you'll need to make the thing move (some of the uphill stretches really do require some effort). The excess riders – it can accommodate another six, including the driver – get to freeload.

Not to worry, because you can put one or two of them to work serving drinks. The first few blocks of the ride from Pub­Crawl­er's East Fifth Street warehouse are outside the city's Downtown no-public-consumption zone, just enough time for some warm­-up beers – you can bring your own ice chest or keg (it's equipped with taps). In our case, we enjoyed some tasty homebrew brought by friends.

When you cross Lamar, the beer must be stowed, but you're not dry for long. Our first stop was at the Tiniest Bar in Texas above Shoal Creek. Bar patrons were clearly bemused as they saw us hop off (not fall off, thankfully) of the vehicle, and a few, as well as passers-by, stopped to inspect the oddity. This thing is its own advertising – just about anybody inclined toward fun will look at the revelry and think, "Oh, hell yeah, I want to do that." The business first rolled into Austin last summer after Lund and her partners failed to convince San Antonio's city government to allow it. "But even when we approached San Antonio, we thought that Austin would be better," said Lund. That suspicion proved correct. "The city of Austin was great to work with," she said.

PubCrawler's genesis came when one of Lund's friends, Jennifer Elliott, went to Minneapolis and her company rented three of the vehicles for a team-building exercise. "She returned and said, 'We did this amazing thing – you've gotta try this!'" Lund says. They did some research, found the vehicles were manufactured in Amsterdam ("We didn't find any illegal drugs," she laughs), and ordered a couple to be sent to Texas.

The cost might seem a little high – $190 per hour on weekends and holidays, $160 an hour Mondays through Thursdays – but split between riders, it's not a bad rate for a hilarious time. For $225 per hour, it can be rented for UT tailgating. It's also available for alcohol-free, family-friendly excursions or a $35 per person Hump Day crawl.

After Tiniest Bar, we hit two more venues on our two-hour party: Haddingtons (great, if a little pricey, beer selection) and Kung Fu Saloon (decent selection, plus old-school video games and Skee-Ball), neither of which I'd ever been to before.

Lund says despite the obvious opportunity to overindulge, PubCrawler expects patrons to be if not on their best behavior, at least within the law. "You can cuss at each other and yell 'Pedal, bitches,' but you can't yell at people on the street," she says. And you need to maintain a certain level of sobriety. So far, it's worked. "We haven't had to have anyone leave the bike, and no one has fallen off."