What does your restaurant garden grow? 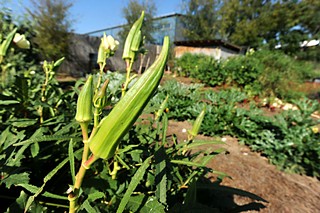 As an avid gardener, I am very familiar with the rewards and frustrations of growing a vegetable garden. Last summer was the hottest in Austin's recorded history, and the heat wreaked havoc not only on the plants themselves but also on the wills of even the most dedicated gardeners. Many struggled to keep plants alive; others quit summer gardens altogether as harvests were meager and watering useless under the scorching sun. Because I know the difference that fresh garden produce makes in cooking, I wholly embrace restaurants that not only use produce from local farmers but actually grow their own food. I recently visited some of my favorite restaurant gardeners to see how they fared this summer and discover their plans for the fall garden.

Nearly 30 years ago, Carla Blumberg remodeled an East Austin cottage and turned it into a restaurant with its own vegetable and herb garden, but it closed after about five years in business. Realizing the property's potential, Dorsey Barger and Elaine Martin seized the opportunity to make their restaurant dream a reality. Today, Eastside Cafe is widely respected as Austin's first garden restaurant, inspiring a whole new generation of restaurateurs and home gardeners. And thanks to years of experience and some trial and error, Barger's garden didn't suffer as much as some others this summer. "Because spring was mild and plants got a chance to establish roots and grow strong early, the garden was incredibly productive until August," says Barger, who tends the garden at the restaurant as well as one at HausBar Farms, which she owns with partner Susan Hausmann. "We had the best tomato crop ever. We probably supplied about 30 to 40 percent of all produce for the restaurant out of the garden. We also did great with sweet potatoes; we cooked the greens as we would spinach and other leafy vegetables that don't withstand the heat. They were just delicious." Because temperatures were still in the 100s when it came time to plant the fall garden, Barger had to get creative to get things going. "We had to get the soil very moist for seed sowing, and put mulch and shade cloths over the seed beds. Things started growing quickly, and we have already been harvesting lots of radishes and turnips, and have carrots, fennel, kohlrabi, and rutabagas coming up strong," she reports.

At Olivia, the garden is currently ruled by towering 8-foot-tall okra plants and a jumble of leggy tomato vines. Chefs James Holmes and Andrew Francisco have been creating dishes with both, including a Creole omelet for brunch and okra pickles for garnishes. As I sit at the bar talking to the chefs, a cook walks outside, scissors in hand, to harvest basil for the evening's service. "We also got lots of squash, peppers, and tons of melons all summer. We served very nice tempura squash garnished with tempura squash blossoms," says Holmes. The garden is a cooperative effort between the chefs and gardener Liz Baloutine, who does all the planting and weekly tending after conferring with the chefs on what they want to grow. They've already started their fall garden with snow peas, blackberry bushes, and a strawberry bed, and will soon be seeding the lettuce and greens. "We are still picking Sun Gold tomatoes, and the kale survived too, so we've been serving those," says Francisco. They also have a microgreens kit and are now growing their own, which not only saves money but allows cooks to pick greens at the peak of freshness.

The summer was not so kind to the garden at Vespaio. Once the temperatures climbed above 100 degrees, chef Ryan Sampson decided to quit watering and pull everything. "We got just a few things, and I felt bad using all the water, with all the restrictions and all," says Sampson, who is also a home gardener. He is now focusing on the fall garden, planting his usual staples: broccoli, cauliflower, broccoli rabe, shallots, onions, and garlic, plus herbs like chervil and parsley and specialties like cardoons and artichokes. Anchoring the garden are fig, olive, and bay leaf trees. A small garden will not be able to supply all the produce for a restaurant as busy as Vespaio, but Sampson will incorporate the garden's produce into specials, so watch the menu for them. The best cauliflower soup I've ever had came from Vespaio's kitchen garden.

Using a different strategy, Sagra is still serving basil and tomatoes from its summer garden. Last fall, it entered into a partnership with Mason Popp, an avid home gardener who started giving his excess produce to chef Gabriel Pellegrini to use in the kitchen. "It was working so well that we asked him if he would be willing to grow things for us," says Pellegrini, who eventually found shared greenhouse space at East Austin Succulents. In the greenhouse, Popp concentrates on tomatoes, basil, and other herbs, and grows peppers and eggplant at his home garden. On a recent visit to the restaurant, I enjoyed a refreshing cocktail of grapefruit with garden sage and vodka that was unbelievable. Popp is currently planting fall veggies at both outdoor garden and greenhouse, which will include lots more sage, fennel, and other experimental crops.

Fonda San Miguel's garden is also in transition, not only from summer into fall, but also in the way it is planted and managed, shifting from intense food production to a mixed-use garden. "We learned that we can't, and shouldn't, grow lots of things, but instead grow more of a fewer things for use at the restaurant," says owner Tom Gilliland. Transition is under way, with garden manager Jeremy Walther planting a large strawberry bed, lots of Swiss chard (which produces almost year-round and is a key ingredient in Fonda's chorizo verde), a variety of lettuces, and some sweet peas. "It is important to plan and adapt to the climate changes we are seeing," says Walther, who will add more native, drought-resistant, flowering plants to the landscape borders. These will attract pollinators like hummingbirds, butterflies, and bees; enhance the garden's aesthetic; and provide cut flowers for the restaurant. He is also planting flowering edibles like purslane (the leaves are popular fare in central Mexico, where they are known as verdolagas), calendula, nasturtium, and herbs used in Mexican cooking like papalo, which thrived in the stressful summer heat and has reseeded freely for two seasons at the Fonda garden. "We are about to have our squash-blossom season and will be serving them in abundance," says Gilliland. "And we've been making mojitos exclusively with our own mint."

The restaurant garden trend fits right into the national "eat local" movement. "Right now, more than ever, it is very important to grow your own food, but not everybody can," says Dorsey Barger, who is thrilled to see other restaurants follow in her gardening footsteps. "So kudos to the restaurants that are doing it!" she says. "They are educating the public on the difference in taste and quality of homegrown produce. This way, everybody wins."