Big Ranch, Big City is Lou Lambert's first cookbook, but it's more than just 100 fantastic recipes and brilliant, artistic food shots; it is a chronicle of Lambert's West Texas ranch roots and the various professional and home kitchens that deliciously shaped his refined but rustic cooking. Lambert grew up in Odessa, and he came from a family of seven generations of West Texas cattle ranchers on one side, and Acadian shrimpers and rice farmers on the other. His culinary experiences formed a patchwork quilt of Texas cuisines. Throw in a formal education at the Culinary Institute of America, stints at top restaurants on both coasts, a mentorship with Grady Spears at Reata, then mix in a desire to use the best local ingredients and cook from scratch, and you end up with a string of popular restaurants and a reputation as a master of authentic Texas cuisine. Each carefully crafted recipe begins with an insightful headnote, while numerous sidebars throughout reveal tricks of the kitchen and facts about the foods. Whether you want down-home dishes or more sophisticated takes on Texas classics, Lambert's self-described "elevated ranch cuisine" has something for everyone. A perfect feast constructed from Lambert's collection would include fried green tomatoes with crab rémoulade, green chile posole with shrimp and redfish, bock-braised short ribs with mushrooms, beer-battered quail with jalapeño-peach glaze, achiote-seared chickpeas with goat cheese, ricotta-spinach gratin, and gingered pear fried pies. You could be just as comfortable eating this sumptuous spread in a cocktail dress or a fancy suit, or dusty and sweaty from digging postholes in hardpan caliche. This is the kind of approachable, delectable food that is born from creative thinking, careful application of talent and skill, and diverse culinary experience and legacy.

Lou Lambert will appear at 11:30am Saturday in the Cooking Tent. 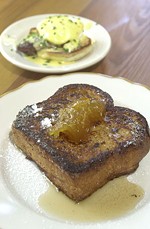 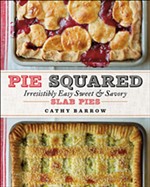