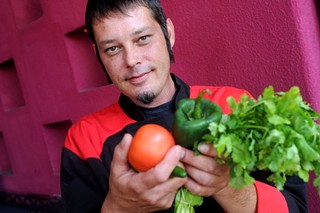 The Austin Chronicle Hot Sauce Festival's cooking demo tent is back by popular demand, with new faces this year as the chef instructors and students from the Art Institute of Austin culinary program join the fun as our sponsoring partners. AIA's culinary academy opened in 2009, offering diploma, bachelor's degree, and associate degree programs in culinary arts, baking and pastry, food and beverage management, and hospitality at its North Austin campus under the guidance of Academic Director Andrea K. Alexander. For the Hot Sauce Festival, the student volunteers will prepare the hot sauces in advance at the AIA's kitchens and will pass out samples to the demo audience. We also have three new chefs demonstrating recipes in each contest category: red, green, and special variety.

Noon-1pm: Chef David Holtzman, a chef instructor at AIA, opens the day's activities. The Brownsville native graduated from the Art Institute of Atlanta in 1994, then attended Le Cordon Bleu London. He held a variety of cooking jobs in Atlanta, South Padre Island, Thailand, and Wyoming, and studied under a master sushi chef while attending the University of Denver. He moved back to Texas and became the lead cooking school instructor at Central Market in San Antonio, where he worked for five years before moving to Austin to become sous chef at Lake Austin Spa Resort. Thanks to his passion for teaching, Andrea Alexander hired him as her first chef instructor at the newly opened AIA. Holtzman will demonstrate a simple red hot sauce made in the traditional Mexican style using a molcajete (mortar and pestle) and will give the audience additional ideas for using this hot sauce as a base for other dishes and more complex sauces.

1-2pm: Longtime festival attendees and food aficionados will rejoice with the return of chef Paul Petersen to our fair city. The San Antonio native and graduate of the Culinary Institute of America gained regional acclaim for his inventive takes on Texas cuisine, first at his much-missed Little Texas Bistro in Buda, then as executive chef at the Gage Hotel's Cafe Cenizo in Marathon. After a stint at a high-end steak house in McKinney and an Italian home-cooking restaurant in Dallas, Petersen's long-awaited return to Austin came when his friend Roger Diaz brought him on board to revamp the menu at Vivo's Lake Creek location. Petersen's cooking demonstrations at the Texas Hill Country Wine & Food Festival are legendary, not only for his cooking skills but also for his engaging personality and style, which elicits roars of laughter and cheers from standing-room-only crowds. Petersen is also a three-time award-winner at the Hot Sauce Festival; this year he'll present special variety hot sauces with recipes that include various fruits, plus tips on how to use the sauces in more complex recipes.

2-3pm: Chef Mizael Saucedo has made a name for himself in the Austin restaurant scene and beyond. After earning a degree in hotel and restaurant management at Houston's Conrad Hilton School of Hospitality, he moved to Austin, where he attended Le Cordon Bleu College of Culinary Arts, then became general manager at Fonda San Miguel before getting back to the kitchen for a brief stint at the iconic restaurant. An exciting opportunity arose at Sandra Bullock's Bess Bistro, where he became general manager and executive chef. Thanks to a green program that includes recycling, composting food waste, using cleaning products with a low environmental impact, conserving water, and growing a small organic garden on-site, Saucedo brought national attention to the restaurant, appearing on Oprah in 2006 and on Rachael Ray in 2009. In 2010 he became general manager and executive chef at Urban – An American Grill, where he continues greening the kitchen through sustainable practices and using as many local products as possible in his innovative cuisine. Combining his classical training with a love of the cuisine of his Mexican grandparents, Sauce­do can make a mean hot sauce, and he will demonstrate a recipe for an upscale green sauce featuring exotic chiles to use as a dip for cucumber slices.