When the lord closes a door, he opens a Thai joint Downtown

Tweet
print
write a letter
This summer's economic unrest, brutal heat, and devastating drought are taking a toll on the local food industry – just ask anyone who relies on outdoor seating for a good portion of their sales, and you'll hear a tale of woe. We've also recently received notices about the closure of small places such as the South Austin locavore-themed Somnio's and the casual Capitol-area Chez Moi Bistro, as well as more upscale chain outlets like Joe DiMaggio's and Beniha­na. However, the news about closings comes right alongside announcements of new restaurant openings, expansions, chef changes, and rebranding for certain spaces. For example, based on the success of the Grove Wine Bar & Kit­chen (6317 Bee Caves Rd.), business partners Reed Clemons, Beth Selba-Lasita, and Matt Berendt have announced the opening of a new retail outlet in the same shopping center called Good 2 Go (327-4246), offering prepared foods to go – soups, salads, sandwiches, entrées, pizzas, sides, artisanal cheeses, condiments, breads, and desserts – plus fresh flowers and a selection of more than 100 affordably priced bottles of wine to complement whatever meal customers put together. It's open daily from 11am to 8pm.

The owners of Sullivan's Steakhouse (300 Colorado) rebranded their corner jazz bar space and threw a party this week to introduce it to the media. Sully's Side Bar features a casual Mexican menu designed by Executive Chef Carlos Garcia, custom tequila cocktails, and local craft brews, all with a live jazz accompaniment. Guests at the steak house have until Sept. 5 to take advantage of Sullivan's Jazz Up Your Summer prix fixe dinner promotion, offering a three-course dinner for two for $79.

34th Street Cafe (1005 W. 34th) has hired native Texan Jason Tallent as its new executive chef. After graduating from the California Culinary Academy, Tallent spent several years cooking in some of the finest restaurants in San Francisco, where he developed a reputation for seasonal, farm-to-table cuisine. 34th Street managing partner Cameron Lockley announced last week that Tallent will transform the cafe's dinner menus, prix fixe offerings, desserts, and special events presentations over the coming months; sounds like something worth looking into.

Fadó Irish Pub (214 W. Fourth) is already known locally as the home for die-hard English Premier League soccer fans. Now one of those lucky fans will win an all-expenses-paid trip for two to celebrate New Year's in London, complete with airfare, hotel accommodations, and tickets to three important EPL soccer matches. Fans can enter the contest online at www.fadoirishpub.com until Sept. 6. Twelve finalists will each receive an official soccer jersey of their choice and a Stella Artois keg party before the winner of the trip is announced. Other soccer fun at Fadó includes special match-day menus, score predictor challenges, and fantasy league teams. 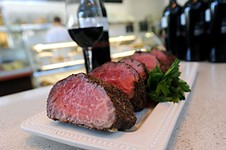