Restaurant Review: Seafood With a Conscience 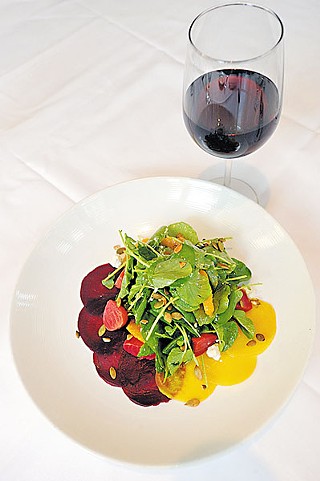 
Shoreline Grill has been a Downtown Austin fixture for 22 years, weathering bad economies, stylistic changes of taste, and a massive construction project at the neighboring Four Seasons Hotel. From its high perch overlooking Lady Bird Lake, the restaurant certainly has one of the most beautiful views in Austin. Reports on Shoreline's food have usually been good but seldom inspiring. Still, a good lunch trade and lots of afterwork imbibers help the place soldier on. We heard recently that Shoreline Grill was making the daring move of committing to sustainable seafood exclusively. The restaurant even signed on with Seafood Watch, a program of the Monterey Bay Aquar­ium. By doing so, it's agreed to avoid fish the aquarium considers to be "overfished or caught or farmed in ways that harm other marine life or the environment" (see partial list below). The goals are clearly admirable, but we wanted to know how well the philosophy translated in the kitchen.

The flash-fried calamari ($12) comes with a smoky tomato sauce and a lemon-caper aioli. The dish features a generous serving of perfectly cooked, crispy squid with an abundance of tentacles; both sauces were admirable, but the aioli was so good we asked for a second helping. We wish we could speak as highly of the blue crab cake ($15). Our crab cake arrived buried under a handful of baby green salad mix. When we stripped off the covering, the cake wasn't browned at all. For the sake of good reporting, we dutifully tried to taste it. The flavor was good, and it was marginally warm – at least until we got to the cold middle. Just to make sure this wasn't the kitchen's intention, I asked for the manager, who assured me the crab cake was not up to their standards and offered to have a new dish prepared on the house. The second version took quite a while to arrive, and it was hot, but overcooked. We thanked them for their courtesy and ate the best parts.

We took a break from seafood with a roasted beet and watercress salad ($8). At the bottom of the salad, there were a few thin slices of expertly cooked red and golden beet. The second named ingredient in the menu description was "citrus supremes," which sounded like a brilliant match for our wine. Unfortunately, we only found three minuscule pieces of fruit, and the advertised Humboldt Fog goat's cheese had turned a bit, giving off an aroma of butyric acid.

Our main courses were both delightful concoctions. The halibut saltimbocca ($32) came with crispy pâte à choux gnocchi (i.e., made from flour, not potatoes), cherry tomatoes, and arugula topped with lemon oil. The halibut presumably comes from the Pacific Ocean to meet the Seafood Watch criteria. In any case, it was flawlessly cooked and delicious. The little gnocchi were not only tasty, but they also absorbed just the right amount of the pan juices to deliver plenty of flavor. The best dish we tried was the Texas redfish ($24) with just-cooked strips of fennel and parsnips and a pungent but judicious amount of yellow curry. Again, the redfish could not have been cooked better; it was nice and juicy with just the right texture.

Shoreline's wine list deserves special mention. It's a well-thought-out list with options from around the world at most every price point, though the markups are rather steep. We chose the Montespina Verdejo ($42), a Spanish wine from the area of Rueda that worked beautifully. Unfortunately, it doesn't seem that the servers are trained on the subtleties of the wine lists, so don't assume your server knows as much about the wines as you do. In fact, the service was problematic all evening, though it seemed our luck of the draw. Other servers around us were accurate, well-informed, always available, and fast. Ours was the opposite. He even charged us for the crab cakes.

Still, the kitchen got most things right, and there is that gorgeous view of Lady Bird Lake. As for the Seafood Watch program, Shoreline should be applauded for taking a step to help preserve our seas without ever making us feel deprived. You can go here and feel good about putting your environmental concerns into action and still be able to eat a delectable meal.