Here you'll find some of the most delectable, exotic sandwiches and appetizers in Austin 
Luke's Inside Out, located in a little trailer next to the Gibson bar on South Lamar, is the latest endeavor of chef Luke Bibby. With the help of his wife, Tracy, and what he describes as "the tightest crew ever," Bibby's trailer provides all the food for the Gibson, besides feeding any other folks who come by to dine. "It's a symbiotic relationship," says Bibby. "The bar gets a kitchen they don't have to fool with, and anyone who buys food from me can sit at one of the Gibson tables to eat. Even in the [air-conditioning]!"

Bibby, whose successful career has included the Granite Cafe, Jeffrey's, Shoreline, Brio, and more than a decade of private catering, much of it for the Backyard and the Austin City Limits Music Fest, is now making some of the most delectable, exotic sandwiches and appetizers in Austin. The menu is ridiculously ambitious. "I just didn't know any better!" laughs Bibby, when asked why he is doing cuisine so swanky and complex out of a tiny trailer.

The Pig ($8) is a perfect example: pulled barbecued pork, bacon, mozzarella, housemade chowchow, and onion rings, rolled up in bread from Phoenicia Bakery and topped with a grilled Fredericks­burg peach. To say it is divine is an understatement. The Chicken ($8) features spicy Sichuan fried chicken topped with crisp sesame slaw on french bread. The Vegetable ($8) features a special Bibby-created falafel patty, intensely flavorful and creamy, topped with eggplant and fresh baby spinach on muffaletta bread. The Cheese ($7), made with melted goat's cheese, Brie, and cheddar on toasted sourdough, is superlative. Unlike many chefs, Bibby is happy to modify his sandwiches, even suggesting options.

In addition to the menu, Bibby usually makes one special sand­wich and three appetizers every evening. The Sloppy Korean empanadas ($7) are heartbreakingly delicious and memorable, the tender pastry filled with Korean-spiced ground beef and kimchi and served with a complex sour cream dipping sauce.

Customers go into raptures about the food at Luke's, and word is spreading quickly in spite of the summer heat. "It's the culmination of everything I've ever done," says Bibby. "And I have never had so much fun!"

READ MORE
MORE Luke's Inside Out 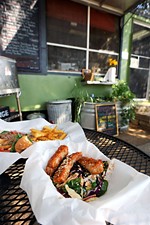 Cheap Eats: Luke's Inside Out
Coating your ribs for less than $20

Luke's Inside Out, Luke Bibby