RSVP for a 'Kitchen Nightmares' taping – if you dare

Tweet
print
write a letter
Gotta whole lotta restaurant news this week! The Fox restaurant rescue show Kitchen Nightmares with bombastic British chef Gordon Ramsay will be filming in Austin from Aug. 29 through Sept. 1, according to a producer for the show. Ramsay fans who'd like to dine at El Greco (3016 Guadalupe Ste. C-200) during the filming there can make reservations via email at austindining@gmail.com.

Congratulations to the well-informed team from Barley Swine – Bryce Gilmore, John West, Sam Mass, and Elizabeth Ruggieri – that garnered the title of Official Food Geeks of Austin at Sunday's Slow Food Quiz Bowl at the HighBall.

Kerbey Lane Cafe's recent summer Can and Cookie charity drive raised more than $2,500 for the Capital Area Food Bank of Texas, providing meals for 12,000 hungry Central Texans. In other big Kerbey Lane news, the South Austin location and commissary will be moving into a larger, more modern space in the Corners shopping center farther south on Lamar later this year.

After 10 years of big business and high traffic, Kenichi (419 Colorado) managing partners David May, Leonard Rodell, and Mike Reynolds decided it was time for a complete overhaul of the Warehouse District mainstay. Since January, they've overseen a complete remodel of the restaurant by Dick Clark Architecture and Noble Design and hired Executive Chef Shane Stark to create a new menu, complete with desserts and signature libations. Look for more details at www.kenichiaustin.com.

Jeffrey's (1204 West Lynn) owners Ron and Peggy Weiss announced the departure last week of Executive Chef Deegan McClung and general manager Kate Wallace-McClung. The talented young couple will strike out to pursue their culinary fortunes in New York City. Sous chef Bridget Bishop will take over the Jeffrey's kitchen for the time being. When I asked Ron Weiss to comment on the rumor that Jeffrey's is being bought by Darryl Kunik's Uchi group, he had this to say: "I'll tell you what I've told our staff – there are no deals on the table, and no contracts have been signed. But I can't say that something like that will never happen." Weiss promised to keep us posted about any future changes at the 36-year-old West Austin landmark restaurant.

Pie man Bud Royer has updated us on all the good news for Royer's Round Top Cafe. After contracting out its pie production to a Houston company for the past 10 years, the Royers have recently opened a new commercial kitchen in Giddings where they can bake all the pies. The kitchen in Giddings isn't open to the public, but pie lovers can now drop in to Royer's Pie Haven in Henkel Square in down­town Round Top for breakfast pastries, coffee, and pies whole or by the slice, Wednes­day through Saturday, 7:30am-5pm, and Sundays, noon-4pm. And finally, Austinites can expect to purchase pies locally from the Pieman's Pie Palace trailer sometime in the fall. We'll keep you posted on where and when. 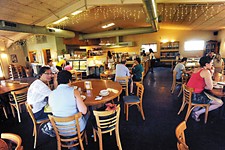