More Lone Star master sommeliers, Hatch chiles return, and foodies see if their brains are bigger than their stomachs

Tweet
print
write a letter
After 11 years, chef/owner Theresa Wilson has decided to close her French fine-dining restaurant Aquarelle (606 Rio Grande) at the end of August and reopen in the same space with a different concept in the fall. "I've decided to take the Italian and French dishes I've worked with over the years at Basil's and Aquarelle and present them with a bit of a Latin twist," Wilson said. As an homage to her Hispanic grandmother, Wilson will call the new, more casual eatery Chonita's. The interior decor and outdoor courtyard will include some whimsical Hispanic folk art. Chonita's will serve lunch Tuesday through Friday and dinner Monday through Saturday. Look for Chonita's to open sometime in late September.

Kudos to Austinites Devon Broglie of Whole Foods Market and Craig Collins of Glazer's for recently achieving the rank of master sommel­ier. This prestigious career distinction comes after six years of work and study by Broglie and Collins and rigorous testing by representatives of the Court of Master Sommeliers. Broglie and Collins are now the only two master sommeliers in Austin and bring Texas' total to six. Both men will be among the participants at the seventh annual TEXSOM Wine Confer­ence held Aug. 13-15 at the Four Seasons Resort in Las Colinas, Texas. For complete details on the conference, go to www.texsom.com.

The end of August always means Hatch chile season, and Central Market is all over them again this year. The fifth annual Hatch chile recipe contest continues online at www.centralmarket.com through Aug. 22, and the Hatch Chile Festival runs in both Austin locations Aug. 17-30. More than 250,000 peppers will be sold fresh or roasted and used in everything from baked goods to entrées to salads and side dishes in the prepared food sections of the stores. And this year, Hatch chiles­ are also going digital! Look for special signs throughout the stores for instructions on how to download the handy new Hatch iPhone app. It's designed for easy use while shopping, offering a database of tasty Hatch recipes as well as two videos on how to cook with the distinctive chiles.

The coolest of all summer foodie activities takes place this weekend at the HighBall (1142 S. Lamar), and I wish I'd thought of it. Slow Food Austin is hosting a food trivia contest with questions ranging from food history to beer and spirits, from pop culture to food trends. Addie Broyles of the Statesman will moderate, and eight groups are fielding teams of local foodies – folks from Trace at the W Hotel, Glazer's, Whole Foods Market, Greenling, Barley Swine, Ecstatic Cuisine, Austin Food Bloggers Alliance, and Balding, Bearded & Bitter will compete to be named the official Food Geeks of Austin. Slow food restaurants and artisans will provide snacks, and drinks will be available at happy hour prices. Some of the proceeds will benefit Slow Food Austin and a lucky local food charity. Tickets are $15 at www.eventbee.com/v/slowfoodquizbowl and at the door. See you Sunday, Aug. 14, from noon to 4pm. 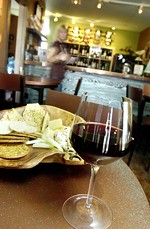 Wine of the Week
For SXSW wine-lovers