The Spirits of Texas 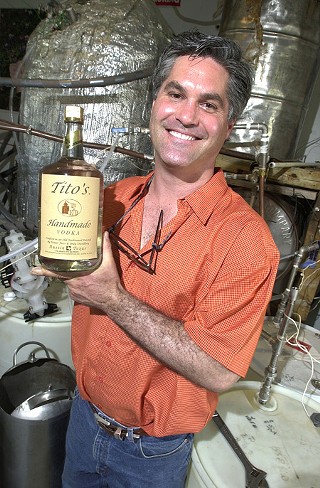 Bert Butler "Tito" Beveridge II started the modern Texas liquor business with Tito's Handmade Vodka ($19), and folks have hoped for a piece of his multimillion-dollar market ever since. But his path to success wasn't as easy as it looked. Tito did rigorous taste tests where he would offer the world's top vodkas beside his in a blind tasting, altering his recipe until it was able to beat almost everything. Once it was on the market, he would park his pickup in front of liquor stores and offer free tastes. If the potential customer liked it, he would encourage and cajole them to go buy a bottle. He offered journalists (myself included) the opportunity to come to his dilapidated distillery in Austin and sit alone in a room with every major vodka on earth. We could taste to our heart's content to see if we could find anything better. Tito financed his early lean years by maxing out 18 credit cards and praying for better days. He mortgaged the farm to start advertising in The New York Times. Despite all of Tito's labors, a lot of folks thought making Texas liquor was an easy idea. Lucky for us – now we have an ever-growing collection of drinkable Texas liquors.

Austin's Paula and Paul Angerstein were next with Paula's Texas Orange ($25), or PTO as it's called in bars. PTO works nicely as a substitute for triple sec or Grand Marnier. Their second spirit was Paula's Texas Lemon ($25), which is quite reminiscent of Italian limon­cello. The major difference between her products and other liqueurs is that Paula's are much stronger. Most liqueurs are usually 40-60 proof, but both Texas Lemon and Texas Orange are 80 proof, so watch out for the alcohol. Dripping Springs Vodka ($19) is the brainchild of brothers Gary and Kevin Kelleher, who made the daring decision to sink their life savings into creating a distillery. Gary designed his own proprietary still (described on their website) which he claims provides the equivalent effect of distilling the vodka 20 times, but without removing its distinctive flavors. And since vodka is by federal definition simply neutral spirits and water, they knew the water would have to be special. That's why their distillery is in Dripping Springs, with its ready access to Hill Country artesian spring water. The brothers won the Purity Vodka trophy from the 2008 International Wine and Spirit Competition, beating labels from all over Europe, including Russia and Poland.

Chad Auler started Savvy Handcrafted Vodka ($25) with a big advantage: He's part of the family that owns Fall Creek Vineyards. That opened doors to distributors, liquor stores, bars, and restaurants. It also meant that he could tap into the pure waters of Fall Creek to make his vodka. Savvy was an immediate hit, so Auler decided to roll out a separate company with Clayton Christopher, founder of Sweet Leaf Tea. The product is called Deep Eddy Sweet Tea Vodka ($18), and the label doesn't lie. The aromas and flavors will have you looking for an ice-packed 32-ounce glass. They use premium teas, not flavored powders, and they use healthier honey instead of high-fructose corn syrup. The final product tastes like real tea, with honest tannins and just enough sweetness, perfect for a hot Texas afternoon. 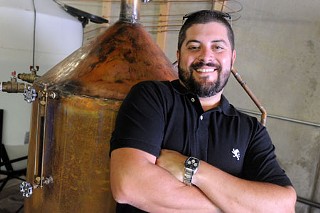 Daniel Barnes, owner of Treaty Oak Platinum Rum ($20), favors a dry, neutral style of rum using Texan molasses. After filtering the sulfur out, he ferments it once, distills it five times, then adds Hill Country spring water. The process produces rum so clean and subtle that it can be mistaken for vodka in a mixed drink. He also decided to try a tea, called Graham's Texas Tea ($17). Graham's also uses premium teas and brews them up before blending with turbinado sugar and Hill Coun­try spring water. The vodka disappears behind the strong sugar and smooth tea flavors, which would make this 70-proof drink almost too easy on a hot summer day. Be careful.

Kelly Railean of Railean Distillers creates her rum in the small town of San Leon. She makes three different styles of small-batch premium rums from unsulphured molasses. My personal favorite is her least expensive: Railean White Rum ($17). Give it a try with just some ice and a wedge of lime, and its delicious, fruity aromas will pop out of the glass. The next step up is the Reserve XO ($18), a cask-aged rum with enough tropical flavor for a Cuba libre. The top-of-the-line rum is Small Cask Reserve ($30), a selected single barrel of Reserve XO. Kelly has also started making a Texas 100% blue agave liquor called El Perico ($28). Notice there's no mention of tequi­la because real tequila can only be produced in a specific part of Mexico. But El Perico's flavors are spot-on for blue agave fans, with the light fruitiness and white pepper aromas you expect in the south-of-the-border products.

The folks at Waco's Balcones Distillery set out to make world-class liquors. One tip-off to their philosophy is their first product, Balcones Baby Blue Texas Whisky ($38). Note that last word is spelled "whisky," not "whiskey." That is not an affectation; it is a spirited salvo. In the world of liquor, whisky is from Scotland, and to a Scotsman, whisky refers to the water of life. The Scots think the term whiskey refers to an unappetizing, dark-colored alcoholic beverage from somewhere other than home. So it should come as no surprise that the company's intended signature product is the BA Peated ($55), a single malt made the same way they do in ye olde Caledonia. It will be available in about a year. Balcones also makes Rumble ($38) from local wildflower honey, mission figs, and turbinado sugar. The owners say it isn't rum, but rather "what happens when whisky distillers play with sugar." All of their products are well-made and worth trying.

Pflugerville-based Spirit of Texas is a small craft liquor maker with big ambitions. Its first product is Pecan Street Rum ($19) made from scratch using raw molasses. Adding Texas pecans infuses the rum with nut aromas. The resulting brew is a delicious concoction that makes a nice mixed drink. We tried it mixed with a touch of Jack Daniel's Tennessee Honey and the combo was a delightful, if powerful, little drink. 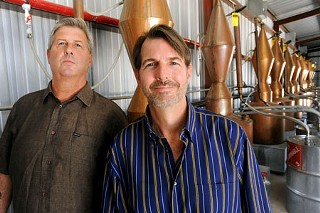 Eyebrows were raised around the state when Dan Garrison started telling folks that he was going to make the best bourbon on Earth in little Hye, Texas. Unfortunately, he makes very small batches and takes his time letting them age for years. Consequently, not many people have had the chance to actually try Garrison Brothers Straight Texas Bour­bon Whiskey. It's hard to even say how much it costs because the whiskey is actually selling briskly in the aftermarket for more than its original asking price. The first bottling was in half-bottles at $50 each. There is definitely some salesmanship going on here, but the truth is, it is really nice bourbon. The Garrisons use organically farmed Texas corn for their mash, and they age in all-new barrels, which lend nice vanilla and caramel aromas to the bourbon. I don't know if it's the best, but it definitely deserves consideration.

North Texas Distillers is up in Lewisville. It's a small, crafty type of place where the main product is DeLos Vodka ($18). These folks use Texas wheat as their base, and a rare vacuum still separates the alcohol at low temperature by sucking the fumes off the mash. The theory is that heat used in distilling hurts the final flavor. Only two other distilleries use a vacuum still, and they're both small-batch operations abroad. DeLos Vodka tastes very fruity and quite smooth. 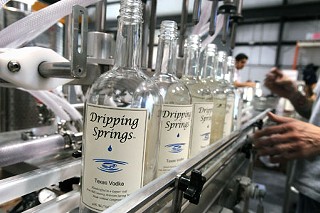 David Watson is a welder from Wimberley who decided to make rum after a trip to Mauritius. He built his own distilling operation, and after a number of years trying different recipes and methods, he finalized his first product, Cypress Creek Crystal Rum ($20). It was closely followed by Vanilla Flavored Rum ($25) infused with whole Tahitian vanilla beans.

All this is just the beginning. Over the next year, Austin stores will receive products from new distillers showing up all over the state. Two to look out for are from San Antonio: Ranger Creek Texas Bourbon Whiskey and Cinco Vodka. Right now we're pushing two dozen distilleries in the state, with many more to come. The state of our distilled spirits union couldn't be better. The good news is, so far, every product made here in Texas is something you can be proud to serve.

The following liquors have wide distribution and should be easy to find or order.

These will take some time and trouble to find, so it's best to call the distillery and ask for help.

Cypress Creek Crystal Rum and Vanilla Flavored Rum (Wimberley, 512/847-6874, www.cypresscreekreserve.com; should be in the larger chains by September) 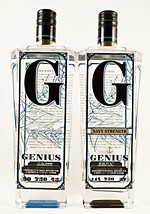 Ginning Up Excitement for a Misunderstood Spirit
Genius Gin 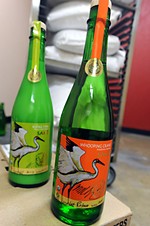 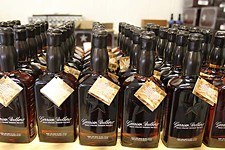 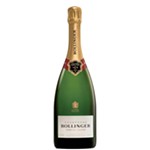