Flip the bird – onto a waffle, that is Chicken and waffles at Frank (Courtesy of Frank)

Ever since I wrote my first story about bone-in fried chicken, friends call or email immediately upon encountering it on Austin menus, and I'm more than happy to follow the leads. I have noticed a couple of trends that are fueling the resurgence of fried chicken, and I thought it pertinent to share the findings.

The most obvious trend is the appearance of chicken and waffles on many brunch menus. Since my last update, Lucky J's has grown in popularity thanks to a move to the corner of Sixth and Waller and the addition of a brick-and-mortar location near its former Rosedale home (5035 Burnet Rd.). Frank (407 Colorado) keeps it simple with a no-frills version that features what may be the best fried chicken around. The meat is brined overnight, tossed in seasoned flour, and fried to perfection. The result is moist, juicy chicken coated in a perfectly crispy, salty crust. The waffles are studded with bacon and served with whipped butter and maple syrup on the side. The only thing I needed was some pickled jalapeños for pure fried-chicken bliss. 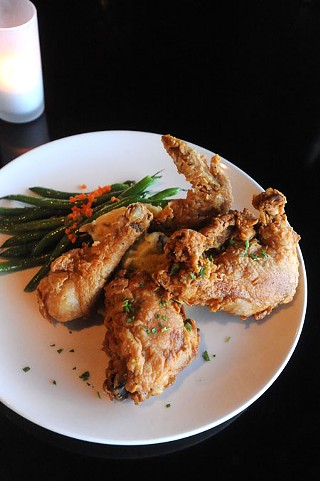 Fried chicken at the HighBall (Photo by John Anderson)

On the opposite end of the spectrum, Trace at the W Hotel (200 Lavaca) offers two fancier dishes during its weekend brunch. The traditional bone-in chicken comes artfully arranged with Belgian-style waffle wedges, Vermont maple syrup, green onions, and a sprinkle of powdered sugar. The salty, crunchy chicken contrasts with the earthy sweetness of the syrup, and every other bite, a burst of green onion adds depth and vegetal freshness. Worthy of mention here, although not on-the-bone, is chef Paul Hargrove's take on the chicken-and-biscuit sandwich: A boneless fried chicken fillet, melted cheddar cheese, a sunny-side-up egg, a thick tomato slice, and a drizzle of chipotle cream are stuffed inside a large, rustic biscuit made from pastry chef Janina O'Leary's grandmother's recipe. Both of these dishes, paired with a couple of sensational cocktails, made for a happy afternoon spent in a food-induced coma.

Chef Ned Elliott takes the chicken-and-biscuit concept up a notch at Foreign & Domestic (306 E. 53rd). A boneless thigh from Buddy's Natural Chicken is dipped in seasoned buttermilk, floured, and fried golden, then set in a flaky black-pepper-cheddar biscuit, and topped with preserved lemon marmalade and a poached egg. The dish comes together with a generous coating of red-eye gravy and a side of creamy romaine slaw, and yes, it's as incredibly delicious as it sounds.

Another trend is Asian-style fried chicken. A few Korean restaurants in North Austin serve it, unfortunately with uneven results. However, I have really come to enjoy karaage – Japanese-style fried chicken coated with a sweet, spicy sauce – at other venues. The Thai-inspired karaage served at East Side King's original location at Liberty Bar (1618 E. Sixth) features a fried chicken thigh topped with fresh basil, cilantro, mint, onion, and jalapeño, served over steamed rice. At Uchiko (4200 N. Lamar), the piping hot, bone-in chunks of crispy goodness are served with outstanding seasonal pickles which are not only beautiful to look at but also provide tanginess to balance the sweet-salty chicken. Raymond Tatum's version at the Three Little Pigs trailer (1209 Rosewood) adds a drizzle of wasabi mayonnaise and a side of refreshing sesame-tinged coleslaw. All three versions are definitely wow-worthy.

But where to go for regular, good old fried chicken with side dishes for lunch or dinner? Ms. P's Electric Cock (1101 S. Congress) caught my eye with its giant sign and attracted me with the promise of freshly fried, locally sourced free-range birds and hearty side dishes. Unfortunately, the food was a huge disappointment the day we stopped by. The chicken was way too dark on the outside and bloody on the inside, and the sides were underwhelming. Happily, I remembered to check in at the HighBall (1142 S. Lamar), where chef Trish Eichelberger fries young birds from Dewberry Hill Farms in Lexington, Texas. The chicks are cut up and marinated in what she calls the "secret bird bath" of buttermilk and seasonings. When ordered, they're dusted in seasoned flour and fried in a cast-iron skillet. The result, dear readers, is total fried-chicken satisfaction: half a bird served with mashed potatoes and the vegetable of the day. Sure, it's $18, but you get what I consider the best fried chicken in Austin today. 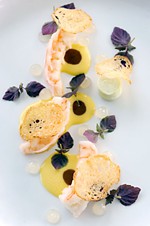