Come for the catfish; stay for the cobbler 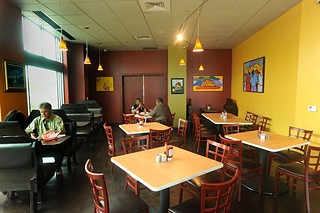 
The city's newly revitalized East 11th Street has become something of a dining destination these days. It seems Blue Dahlia Bistro is one of those "it" places where everyone wants to be. Zandunga draws crowds for its creative Mexican-style bistro fare, and Franklin Barbecue has become this year's national shrine for disciples of smoked meat.

Most recently, 11th Street Station has opened to fill the Southern and Cajun cuisine niche left by the now-defunct Ms. B's. Light-filled and cheery, with brightly colored walls and an open floor plan, 11th Street Station should be the perfect complement to the district's vibrant culinary options. And it would be, were it not for a persistent awkwardness in the general flow of service.

To wit: During one recent visit, the restaurant wasn't particularly crowded, yet it took almost half an hour for the food to arrive. After we had finished eating lunch, the waitress took our dessert order, a peach cobbler – and when it arrived, she asked us where we thought she should put the cobbler. I surveyed our table, crowded with dirty plates, and suggested she might try clearing away some of the lunch dishes first.

Sadly, ill-trained staff and poor kitchen timing are not the only weaknesses 11th Street Station suffers. The menu promises a cornucopia of Southern food goodness – catfish, fried chicken and waffles, gumbo, fried pork chops. But much of what we sampled seemed lifeless and hollow. The elements in the chicken and sausage gumbo were put together rather than slowly stewed. The macaroni and cheese tasted old and dry. The croutons on the Caesar salad came out of a bag, and the sweet-corn nuggets served as a side tasted like a Sysco product.

To the kitchen's credit, 11th Street Station makes an excellent light fry coating for both the fried pork chop ($8.99 at lunch, $9.99 at dinner) and the fried chicken. I also loved the crisp waffle served with the chicken and waffles ($10.99). But I probably would have preferred leg, thigh, or breast pieces to the wings-only format here, and I thought the pork chop itself was tough and dry.

Most people who come to 11th Street Station order the fried catfish ($10.99); this is where the restaurant shines. Co-owner Homer Hill previously operated Catfish Station (now owned by his nephew) and Mr. Catfish (now closed) and consequently knows a thing or two about fish. The light cornmeal coating on the fish is spiced with a well-guarded secret seasoning developed over many years. The fish is as it should be: flaky and moist. I understand why almost everyone in the place ordered it.

But the real star of 11th Street Station's menu was co-owner Rick Jones' peach cobbler ($2.99), liberally spiked with cinnamon and what I suspect may be allspice. The sweet stewed peaches were amply piled with buttery crust, and the whole thing was just irresistible.

According to Hill, 11th Street Station has recently updated its menu, adding a number of healthier choices, such as spinach salad, grilled chicken, and a broccoli side salad that is so good even dedicated broccoli foes (Hill counts himself as one) will love it. The restaurant often features live music after 9pm and will serve a limited menu for those events.