A Brief History of Food Radio

How it all began 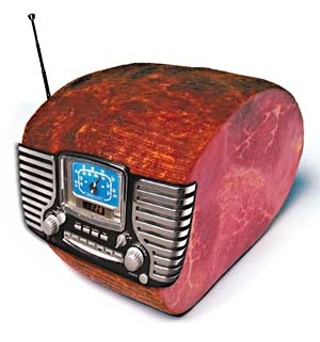 From its earliest days, food had a presence in radio programming. It's generally accepted that the first food radio show was in France, beginning in 1923. Dr. Édouard de Pomiane was an eminent food scientist at the Institut Pasteur, and his hobby was cooking. He wrote a dozen cookbooks and hosted weekly programs on Radio-Paris, telling stories of his kitchen experiences and providing recipes suitable for home cooks. As a popular and respected cook, he was arguably the food world's first media personality. Cooking With Pomiane is a charming book of essays and recipes from his radio shows; it's easy to see why he was a star.

In the U.S., long before her face graced General Mills' product packaging, the fictional Betty Crocker hosted her own radio show, the first American food broadcast. Initially aired in Minnesota in 1924, the program was nationwide by 1926, and The Betty Crocker Cooking School of the Air ran for almost a quarter-century. Then, as now, Betty was a construct dreamed up by corporate executives – apparently 13 actresses at different radio stations around the country performed as Betty, answering questions, providing tips, and generally giving listeners confidence about cooking.

Other national food radio personalities from the 1930s through the '50s included "The Nation's Homemaker," Ida Bailey Allen; Mary Margaret McBride, an eminent radio journalist who discussed food and restaurants; and John MacPherson, "The Mystery Chef."