Chef Sonya Cote Is a Woman on the Move

Catch her when you can 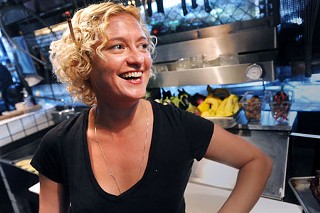 Like many folks running kitchens around Austin, Sonya Cote took a meandering route through both art and commerce on her way to a culinary career. The Rhode Island native studied graphic arts at the Art Institute of Dallas before signing on with the Whole Foods art department in 1991. She eventually worked her way up into marketing with the corporate giant, hiring and promoting chefs around the Metroplex area. "One year while I was working in marketing at Whole Foods, I won a staff contest, and the prize was a farm tour of Sonoma County. The things I saw on that tour and reading Alice Waters' biography changed my entire perspective about food," she recalls. After a stint in Fredericks­burg running the Hoffman Haus hotel, Cote moved to Austin and worked with avowed locavore chef Jesse Griffiths of Dai Due before landing her current job as chef at the East Side Show Room when it opened more than two years ago.

During her tenure at ESSR, Cote has developed a solid reputation as a reliable supporter of local farmers and an ardent advocate for the burgeoning local food movement. Her enthusiastic support of local food manifests itself in many ways: In addition to ordering from local suppliers, she encourages farmers to drop by her Eastside kitchen with produce that didn't sell at Saturday markets, and she's already hosted two roundtable dinners that brought together farmers, ranchers, chefs, local politicians, and media representatives over local meals to discuss food issues in which they all have a vested interest.

Cote's newest project is an exclusive dinner series to be called Homegrown Revival (www.thehomegrownrevival
.com goes live Aug. 1) that will bring Texas farm and ranch products into urban spaces and tell the story of the life of a different animal raised for food at each meal. "Hank Cathey, who curated the food and drink events during Fusebox Festival this spring, is working with me. Our first dinner will be the story of a goat on Sept. 5," Cote reports. After the goat dinner, Cote will serve as the local chef for the national "Outstanding in the Field" traveling dinner series when it returns to Boggy Creek Farm in October. She's also part of a partnership that's working to open Hillside Farmacy – a neighborhood grocery, deli, and bar in a historic building on East 11th Street – before the end of the year. This young woman is definitely on the move; catch her when you can. 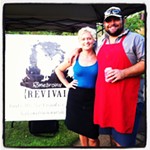