When I was just a little grape, I asked my vinter, 'What will I be?'

Syrahs seem to be coming from everywhere, whether called Syrah in most of the world, Shiraz in Australia, or referred to geographically in France's Rhone Valley, where it's the dominant grape in Cornas, Côte-Rôtie, Crozes-Hermitage, Hermi­tage, and Saint-Joseph. It is also a grape that can be made in myriad styles, from Rosés to dense, jammy fruit-bombers, which means you can have it as you want it.

The American version I look out for every year is Bonny Doon's Syrah Le Pousseur ($18). Winemaker Randall Grahm has an uncanny touch with Syrah. His versions always carry the dry, food-friendly style of the French, but with just a tiny bit more American oomph. Imagine aromas of blackberries and white pepper, and you can imagine how nicely this would go with grilled pork tenderloin.

If you want to try a French version without totally breaking the bank, look for Ferraton Père & Fils Crozes Hermitage la Matinière ($22). It's even drier and more acidic, so it really makes magic with food, ideally a grilled steak, a baked potato, and garlic bread.

Those looking for the all-out, stain-your-teeth style are advised to hunt for Mollydooker's The Boxer ($25), a wine that sells out quickly at each release. A tad more restrained, though still a huge wine, is d'Arenberg's The Footbolt Shiraz ($18), and for a budget glimpse of what all the fuss is about, look for d'Arenberg's Stump Jump Shiraz – it isn't made every year but can often be found for less than $10.

The Bonny Doon and d'Arenberg wines are widely available. Your favorite fine wine shop should be able to get the Ferraton, and the Mollydooker occasionally shows up locally but can also be ordered online.

Wine of the Week
Favorite Rosés for the Summer 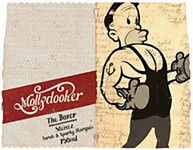