Tweet
print
write a letter
Send somebody to the Quickpak store
We need some ice and an extension cord
A can of bean dip and some Diet Rites
A box of Pampers, Marlboro Lights ...
Send somebody to the Stop 'n' Go
We need some celery and a can of fake snow
A bag of lemons and some Diet Sprites
A box of tampons, some Salem Lights
– Robert Earl Keen, "Merry Christmas From the Family"

Sure, that's the stereotype of the convenience store, and most of the time, the reality as well. The only thing Keen left out was the usual beer selection: Bud Light, Miller Light, Coors Light, some Shiner Bock if you're lucky.

But in Austin, that's changing in a big way, especially as far as the beer is concerned. Lately, it seems like corner stores in this town are more likely than not to have a decent microbrew selection – and a select few are just flat-out over the top.

I first noticed this trend when I moved to the Crestview neighborhood in North Central Austin 14 years ago. I'm not sure why I stepped into the Major Brand store on North Lamar, across from Threadgill's, but in those early days of the American microbrew revolution, it was pretty surprising to see multiple varieties of Samuel Adams in a gas station. Then I found the Bread Basket on Justin Lane, within walking distance from my house, which introduced me to several craft beers I'd never seen before. (Since you can't actually buy bread there, we affectionately nicknamed it the "Beer Basket.")

Since then, such places have become less of a rarity. Indeed, those two now seem rather pedestrian in comparison to some others. I decided to take a look around Austin and explore this phenomenon. What follows are the best of what I found. With each, I tried to list examples of what really sets the store apart for me: Does it have beers I've never seen before or beers I really wouldn't expect to find at the local Stop 'n' Rob?

This list isn't intended to be exhaustive – no doubt, I missed your favorite gem. Please tell me what I've missed in the comments section. 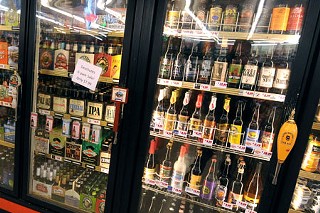 
More clearly a convenience store but still pushing the envelope like Whip In, Live Oak Market (no relation to the Live Oak Brewing Company) is another South Austin treasure. "We're like a convenience store on steroids," says Raj Singh, who identified himself as the dishwasher, but as another recent Chronicle review noted (see "Live Oak Market," April 15), he's actually the general manager.

Singh animatedly showed me the many things that set his store apart – a tasty deli, a soda machine featuring only sodas made with real sugar, lots of locally made products, Sabbath on the stereo – but I was there for the beer.

"All our beer selections change," he says. "Anything [brewed] in town we'll have. ... We keep the beer cooler clean, because we can. We never let anything expire."

Compared to some others that have sprung up, Live Oak's sheer numbers are relatively modest – seven coolers, six devoted to microbrews – but the diversity is impressive. Considered in the overall context of the store's uniqueness – be sure you take home a panini from the deli with that six-pack – this store's neighbors along Manchaca Road are mighty lucky. 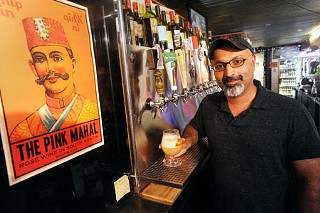 Dipak Topiwala of Whip In (Photo by John Anderson)


You think Austin has lost its weird vibe? Then clearly you haven't been to this unique blend of convenience store, beer bar, and Indian food cafe. (Yes, you read that right.) It's head and shoulders the best in town – but calling the Whip In a convenience store really isn't fair to the competition.

But the Topiwalas noticed that import beer sold especially well there – and quickly. So they bought more and developed a reputation as a beer store, which is now bordering on legendary. Topiwala kicked out the Jolt and gas pumps and replaced it with lots of organic and locally made products. They added a kitchen so his mom could start serving up tasty Indian food. Then they added a bar and taps; they're up to 60 now, a selection that can stand up to the best bars in town. The tap wall includes some hard-to-find stuff and some kegs you'll find nowhere else, such as the ones Topiwala sets aside for aging. On my first visit, he had a keg of 2005 Real Ale Sisyphus, and it was well worth the $11 for half a pint. I was sad to hear it has since been drained.

"We followed the model of Central Market or Mandola's," Topiwala says. "It's almost a misnomer to call us a convenience store."

But if you are just shopping, they have 28 coolers of beer, almost all of it microbrews, as well as a couple of rows of wine (and 24 wines by the glass at the bar). The selection is just unreal, drawn from all corners of the world, although it was a Houston brew that pleased me the most: I've been trying and failing to find Saint Arnold Weedwacker around town, and Whip In had it.

Topiwala plans to expand even further by becoming a brewpub. After he gets his brewing license, he says, he'll start whipping up some "high-gravity and high-alcohol" brews. And I didn't think this place could get any better. 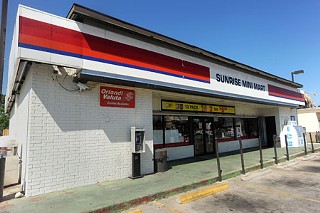 
I love Crestview – it's a helluva a great part of town. And since I moved here, it just keeps getting better. This place is a superlative example why. When a fellow beer lover tweeted that this place had "stepped up" on the beer front, I was intrigued. Huh? That tiny little Citgo station on Anderson?

Of course I had to investigate, and let me tell you, "stepped up" is an understatement. "Gone berserk" is more accurate – 10 coolers of the good stuff, including the most amazing Belgian selection I've seen since the Grape Vine Market on Great Northern closed, as well as tons of bombers. They even had Monk's Cafe Flemish Sour Ale, which I didn't realize you could get outside of the famous beer bar of the same name in Philadelphia. Other good finds: Jester King products and San Antonio's Ranger Creek La Bestia Aimable.

Beer buyer Raz Mehasania is serious. "We always get feedback; we study all the microbrews and check out the ratings on websites like BeerAdvocate. We always try to stay ahead on things like limited editions, special editions, and collaborations."

The store hosts a beer tasting about once a month – when I visited last, Mehasania was preparing for an event with representatives of Ommegang, Duvel, Young's, Deschutes, Butte Creek, and Kingfisher.

"I was surprised and amazed," said a neighborhood customer as he made a purchase. "They are reasonably priced, competitive with Central Market and Whole Foods."

There are at least seven stores using this name in Austin – two in my neighborhood alone – so be sure to check that address. 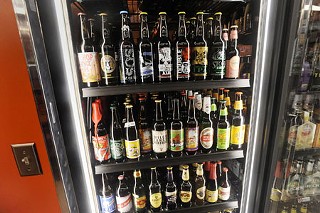 
Another entry in the organic-and-local-convenience-store trend, this is one of the few places on Barton Springs Road's Restaurant Row that's not a restaurant. Need a sixer after swimming at the springs or kite-flying at Zilker Park? Thom's has plenty. Or maybe you just want one? That's okay, too; there's a cooler full of singles. Mix and match them into a sixer for $10.95.

I'd have loved to have chatted with the owners, but this place was hopping. They looked pretty busy. Ironic touch: Thom's actually does have the big-name macro brews – tucked away up high on the top shelf.


Yes, the place with all the flags out front. This was the first place that showed me just how mind-blowing a corner store can be when it really commits itself, and it makes me wish I were still a Hyde Park resident. I've already written this place up (see "Hyde Park Market, Deli & Organic Grocery," Jan. 23, 2009), and since then, it's gotten even better.

An awesome new addition: nine coolers ... devoted just to singles! Keep walking all the way around the store, and you'll find 27 more coolers after that, nine of which are devoted to bombers (large bottles), so really they have 18 coolers for singles, depending on how you define it. If you're wanting to experiment but afraid to commit to a whole six-pack, this is definitely your place. (And yes, they have the make-your-own-six-pack option.)

In that 2009 article, the new owners told me they decided to get just one of everything from their distributors, and now they have about 550 choices. It's just ridiculous. Don't go here if you're indecisive. Whether you want the best of the locals or some fine Belgian brews, I doubt any place in Austin has a greater awesomeness-per-square-foot quotient.

And as the name suggests, they have a far-above-average food selection as well.

(As I was leaving on recent visit, the guy in front of me was getting a 12-pack of Bud Light Lime. Dude. Seriously?)


Something was clearly up when this Exxon Mobil station got a makeover and suddenly started looking ... well, not ugly. Considerably spiffier. And when I spied a neon Boulevard Brewing Co. sign from the outside, I suspected the change wasn't just cosmetic.

Inside, seven of nine coolers are devoted to microbrews and imports, with some very eclectic options (and a large wine selection). Beer buyer Daniel Joshi said the station's owner and a new partner decided to upgrade in response to the area's beer-drinking clientele: "The Draught House is down that way, and the Flying Saucer is the other way, and our store is in the middle. After people go to those places, they go through us. Bud Light you can find anywhere, but the people that buy here don't really buy Bud Light."

Joshi said they're looking to add more coolers and expand even further.

Good Luck Food Mart 3713 Guadalupe, 323-9711. This was a cruddy little Circle K when I lived in this neighborhood – no longer. Off-season find: Harpoon Winter Warmer.

Monarch Food Mart 1402 E. 38½, 478-4492. This is another neighborhood where I used to live. There was certainly no Belhaven Scottish Stout here back then.

The Bread Basket 2213 Justin, 302-5822. Six coolers, plus two racks of warm beer and friendly owners. This is the place where I discovered North Coast Old Rasputin Russian Imperial Stout – if they never stocked beer again, I'd still be grateful to them for turning me on to that one.

Hyridge Grocery 3503 Hyridge, 346-1047. It has a modest selection, but hey, how many stores this size carry Ommegang Abbey Ale? And I've never tried Famosa, but if you want a Guatemalan beer, here it is.