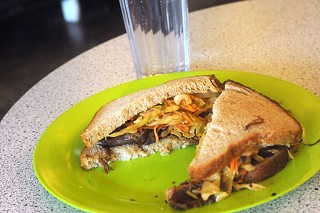 
Thai Fresh is expanding again, this time taking over the Cafe Caffeine space directly adjacent to the popular Thai delicatessen. An open archway already connects Thai Fresh with the coffeehouse, which has stayed operational throughout the transition, continuing to serve espresso drinks, baked goods, sandwiches, beer, and wine.

But already there have been subtle changes: Jam Sanichat, the sunny owner and chef of Thai Fresh, has brought in Casa Brasil coffee beans, a directly traded coffee roasted locally in Austin. The bakery case is full of vegan and gluten-free baked goods as well as conventional ones, and the sandwiches are trending Thai. "The bestsellers, by far, are the Thai sandwiches," says Sanichat, "satay chicken with peanut sauce and pulled pork with spicy cabbage" ($6.50 and $4.99). "With our vegan ice creams and pastries, we get a lot of vegans in here, so I have a mashed chickpea with lemon tahini sandwich [$4.99] for them, too." Several mainstream sandwiches are served as well, such as egg salad and tuna salad ($4.99 each).

Breakfast tacos are another addition. These too incorporate Thai flavors; the most popular is the Thai omelet taco ($2.75) that Sanichat also serves at the Downtown Farmers' Market. Other varieties include curried potatoes and egg ($2.75); sausage, egg, and potato ($3.25); and black bean and potato ($2.75). Sanichat is dedicated to local sourcing: All the breakfast tacos are made with locally produced pastured eggs, and the meats come directly from nearby farms.

The Cafe Caffeine sign is still up, but when I ask her if she's going to change the name, Sanichat's face completely lights up: "Oh yes! The new name is going to be Thrice." I immediately jump to the conclusion that the name refers to the tripling of the Thai Fresh footprint. "Oh no," she says, "Let me tell you. The name was totally inspired by Conan O'Brien!

"You see, I was watching Conan, and he had this bit where he was saying, 'Why are we inventing new words all the time, like "frenemy" and "vlog," when there are perfectly good words just languishing in the dictionary, like "thrice"?' So the next day, I felt sorry for 'thrice' and used it as much as I could. Talking to the staff, I am saying, 'I have told you thrice already!' and 'I have already looked there thrice,' and everyone was laughing and having fun with it all day. And it occurred to me, this is the third time I have tried to expand into the coffee shop, and this time, when I tried for the third time, I was able to get it. So Thrice will be the name! Once I get the new sign up, I am going to take a picture and send it to Conan and thank him for the inspiration. What do you think? Maybe I'll get on national TV!"

Besides the subtle changes that have already taken place, much bolder changes will be happening over the summer. To begin with, Thrice will start serving brunch in time for Father's Day (June 19), with food made to order by a hot line. In addition to the breakfast tacos and sandwiches, Thrice will be serving Thai fried rice with fried egg, Thai tea French toast, breakfast pizza with fried egg, and Thai rice soup.

Sanichat also plans to have live music for a few of the brunch hours, with jazz singer Laura Graft. "I'm also thinking about maybe having some bluegrass music," she says, "Maybe outside, after it cools off in the fall."

Brunch will also feature mimosas and san­gria in addition to the dozen wines by the glass that are now served, and the beers on tap (512 IPA, Live Oak pilsner, and Lone Star) will see a few more additions.

But all this pales in comparison to the biggest change of all: Thai Fresh is going to change from a delicatessen-style establishment, where already-prepared food is served from a cold case, to a regular, food-made-to-order restaurant. "I know it's going to upset some of our clientele who stop by to get a three-item plate on the way home. But the public has been adamant: People want things made to order, and now we will have enough space to do it," Sanichat says. There will be a short closure for remodeling, probably around the Fourth of July, but when Thai Fresh reopens, it will be as a restaurant that has a menu that you order from, rather than a deli case.

"I still want to be able to change what we are offering with the seasons, so we will definitely have specials, lots of specials!" Sanichat laughs. "It's going to be hard to let the deli case go, but already I am excited about all the things we are going to be able to do. I'll be able to serve appetizers, like my spicy corn fritters, and desserts like warm sticky rice topped with mango-lime ice cream. And fresh noodles! It's going to be great."