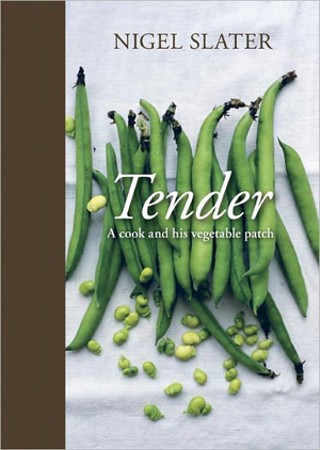 Tender: A Cook and His Vegetable Patch


Many cookbooks are published these days; scores of food celebrities are battling to stake claims on "their" territories, and most of them are doing it by the quantity, rather than the quality, of their books. The first few books use up the recipes they actually make, and then comes volume after volume of recipes that have been invented to meet the deadline.

Revered British food writer Nigel Slater's latest enters the fray, a solid and definitive work among the wannabes. This is a pragmatic book, full of the recipes that form the backbone of Slater's repertoire, recipes that he has perfected by making them dozens, if not hundreds, of times. These are dishes intended not to dazzle, but to nourish.

As the title implies, this is the story of a cook and his garden. Some of the most fascinating photos are of Slater's small, urban garden changing with the seasons. All the photos have a strangely dark, overcast look that underlines the enormous difference in climate between the British Isles and (insanely) sunny Central Texas. In spite of these differences, his list of garden produce mirrors ours exactly; English summer is, after all, Texas winter. Asparagus, beets, leeks, broccoli, carrots, chard, eggplants, tomatoes, peppers, potatoes (the list goes on) are presented in the beautiful, reliable ways Slater has learned to prepare them: young kale with lemon and garlic, little cakes of leek and potato, grilled ham with baked onions, spinach with orange and feta, winter cabbage with juniper and cream, a carrot soup the color of marigolds.

It is a litany of recipes that are simple enough for daily use throughout the year, yet breathtaking in depth of flavor and visual appeal. It is the food that a stellar cook actually makes at home from the bounty of his garden and local market. As an added bonus, apparently England abounds in other ingredients indigenous to our area: Goat's cheese and lamb figure prominently in many recipes as well. This is one of the most useful books for the home cook that has come out in years. 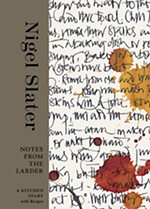 Notes From the Larder: A Kitchen Diary With Recipes