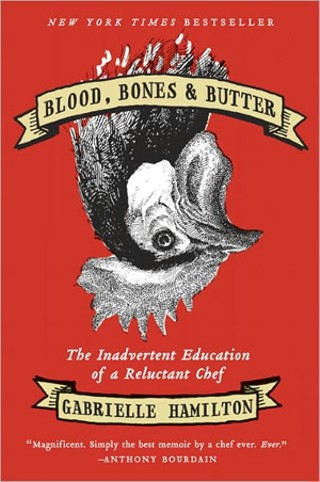 Blood, Bones & Butter: The Inadvertent Education of a Reluctant Chef


If you've been vacationing on Mars or just ignoring culinary news, perhaps you missed that Gabrielle Hamilton's memoir is generating big buzz. For good reason: It's brilliant writing, the simultaneously eloquent, touching, fierce, revealing, concealing, and sometimes cringe-inducing recollections of an iconoclast.

Hamilton is chef/owner of tiny Prune, a beloved East Village restaurant where lines have been forming since 1999. (She just won the 2011 James Beard Award for Best Chef of New York City.) Her story begins with idyllic childhood memories of bohemian parents demonstrating "how to create beauty where none existed, how to be generous beyond our means, how to change a small corner of the world just by making a little dinner for a few friends." That idyll imploded in divorce, essentially leaving Hamilton to raise herself. As a self-sufficient 13-year-old, she lied her way into a restaurant job. "I felt instantly at home .... And that, just like that, is how a whole life can start."

The next 20 years are full-tilt-boogie commercial cooking – at summer camps and in catering kitchens and for the king of Thailand. A sea change occurred when Hamilton provided lunch for a National Book Foundation conference, "a roomful of people I wanted to be," spurring her on to a creative writing degree in Michigan, where she also reconnected to cooking with heart via Misty, an unexpected Midwestern muse.

Some of the book's most incandescent passages are portraits of Hamilton's culinary muses: Misty; Breton cafe proprietor Marie Nöelle; Margarita, a cook in Greece; Alda, Hamilton's unforgettable Italian mother-in-law. One poignant scene describes her ambivalence as part of a women chefs' panel about kitchen sexism. "Why didn't we say, If you want your cooking career to be recognized, be a good cook! Cook, ladies, cook!"

Reading Hamilton isn't without a little frustration, mostly about what's unsaid – somewhat curious in context of so much fearless revelation. Why does her mother remain so resolutely unforgiven? Why only passing references to a long-term relationship? Although her marriage's disintegration is excruciatingly documented, it remains mysterious why such a painful mismatch ever occurred. Gaps aside, it's an utterly compelling self-portrait told in terms of hunger, sustenance, and nurturing.