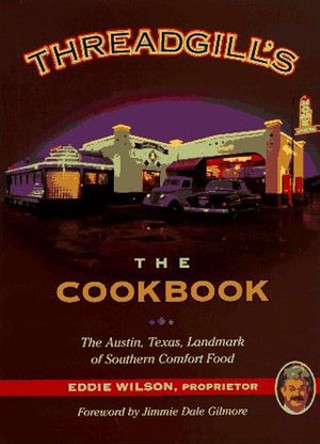 
Threadgill's: The Cookbook is as much a memoir of Southern living and eating in the Fifties and Sixties, a history of Eddie Wilson and Threadgill's Home Cooking and the growth of the Austin music scene, and a gracious memorial to Kenneth Threadgill as it is a cookbook of the copious dishes served at this Austin restaurant institution.

The book opens with a detailed timeline starting in 1933, the year that Wilson's then-11-year-old mom, Beulah, was handed the chore of cooking three meals a day for a family of nine, and the year that 22-year-old Kenneth Threadgill bought a Gulf gas station way out in the boonies north of Austin. Wilson does a seamless job of leading us through the interwoven tales of his Southern Mississippi family, Threadgill and his bar, the music scene and the Armadillo, and the birth and growth of Threadgill's restaurant.

When Wilson discusses why he uses canned vegetables for some items, you realize that his family put away 500 jars of vegetables each summer to get them through the winter. You learn why dinner and supper are so different and what they used to mean in the South: Dinner (lunch) was the big meal; supper, a pre-sleep snack. Wilson speaks eloquently about the foundation of his menu: the Southern restaurant format of meat and three and the importance of vegetables on that blue plate.

The 100 or so recipes are arranged in menu order, starting first with the Pantry (stocks, seasonings, sauces, dressings), and each section is preceded by an entertaining discourse on the relevant background. The recipes are all logical and easy to understand, and with few exceptions, relatively easy cooking. If there were a downside, it's that most recipes make eight to 10 servings; we assume they scale down with no problems.

Between the covers you'll find the words to Guy Clark's "Homegrown Tomatoes," humorous lyrics by Roy Blount Jr., and an amazing graphic historical novel by Jack Jackson. Most importantly, you'll find the food of a family and an institution, revealed in the context of a fascinating history.