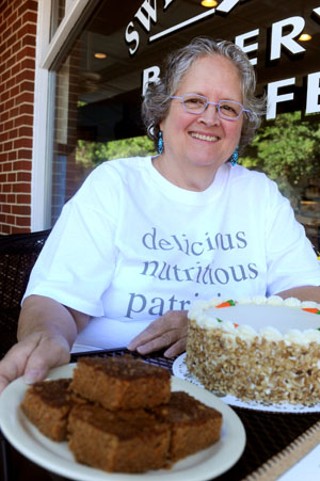 Before Austin had good bakeries and cool coffee shops in many neighborhoods or a Starbucks in every strip mall, there was Sweetish Hill Bakery. Founded in 1975 by European-pastry-obsessed friends Patricia Bauer-Slate and Tom Neuhaus, Sweetish Hill was Austin's first European-style bakery. The partners began serving authentic French pastries and European desserts paired with excellent coffee from another newish Austin business called Anderson & Co. Coffee and fresh-squeezed Good Flow juices from yet another. The business took its name from the original location, a stately 19th century Victorian house on the crest of Swede Hill in East Austin. Sweetish Hill struggled for the first few years, but it became a solid success after Texas Monthly proclaimed it the best bakery in the state in 1979. The bakery eventually moved to Old West Austin, Neuhaus moved on to other pursuits, and Bauer-Slate put out this spiral-bound cookbook in 1995 to celebrate the bakery's 20th anniversary, with a recipe for every year.

Each of the 20 recipes is paired with a charming anecdote that illuminates some aspect of Sweetish Hill's (and Austin's) history. Bauer-Slate reminisces about having to educate the clientele on the need for dipping the very sturdy biscotti in some kind of liquid (1995), introduces Tom Neuhaus with the mocha buttercream for his eponymous Prinz Tom Torte (1975), and describes the evolution of the Heart in the Deep of Texas cookies (1976). She includes recipes from the bakery's short-lived expansion into the restaurant business (kartoffelpuffer, 1977) and the opening of a now-defunct deli (broccoli sfinciuni, 1983). The gingerbread cookie recipe (1987) comes complete with a hilarious tale about the Valentine's Day Sweetish Hill sold burnt cookies decorated with angry messages, and Bauer-Slate recalls the outraged-customer uprising when the Whopper cookie (1991) was taken off the menu for a short time.

Bauer-Slate sold her interest in Sweetish Hill to longtime business partner Jim Murphy in 2008, and now she runs a catering company called Patricia's Lunch­box that makes healthy school lunches. Even though she's no longer with the bakery, many of the items described in the book are still part of the 36-year-old bakery's repertoire. The recipes will sweeten your life, and the stories provide great insight into the evolution of Austin's culinary culture.