A grill big enough for Texas, some morsels for Mother's Day, and other food news

Tweet
print
write a letter
Austin's well-deserved reputation as an emerging food city doesn't just attract national media attention – major companies are adding River City events to their promotional tours as well. During South by Southwest, brands as diverse as CNN, Maker's Mark, and Friskies were in town promoting themselves. This weekend, John­son­ville Sausage brings the world's largest touring grill to our annual Pecan Street Festival. The semi-truck-sized Big Taste Grill has served up Johnsonville Brats for charities everywhere from the Daytona 500 to the Kentucky Derby, and its proceeds this weekend benefit LiveStrong (www.livestrong.com).

There's no shortage of thoughtful things to do for Mom this weekend. For example, Capital One Bank is sponsoring a buy-one-cupcake-get-four-free deal at select Hey Cupcake! locations: 221 E. Parmer or Third & Lava­ca between 11:30am and 1:30pm on Thursday and Friday, May 5 and 6, or at the Domain from 11:30am to 1:30pm on Saturday, May 7. You could also buy Mom a big hat and treat her to a mint julep at a Kentucky Derby watch party, or take her out for brunch somewhere special. Some of Austin's newer restaurants have just added brunch to their lineups, so consider the following when you make your plans: the enticing locavore menu at Trace at the W Hotel (200 Lavaca), recently named one of the 124 Hot Hotels in the world by Conde Nast Traveler; the always appealing and affordable Foreign & Domestic (306 E. 53rd); the Italian-Mediterranean-inspired brunch with a spectacular lake view at Soleil (6550 Comanche Trail); an Italian brunch buffet at the newly reopened Sagra Trat­toria (1610 San Antonio); and the very attractive dining space at Zed's (501 Canyon Ridge Dr.).

Max's Wine Dive (207 San Jacinto) recently added a blue plate lunch menu on weekdays, 11:00am-2pm. Chef J.P. LaCoste's kitchen is serving up comfort food specials offering a choice of one protein and two sides for $9 with a guarantee to have diners in and out in less than an hour.

The newly updated second edition of the Vegetarian Guide to Austin is now available at www.vegaustin.com/guide. Conveniently sized to carry anywhere, the downloadable, tri-fold guide is full of worthwhile information on vegetarian and vegan dining options at Austin-area restaurants and mobile food vendors.

Patterned after the legendary fortnight events at Neiman-Marcus, Central Market stores across Texas will host their second annual excursion in the international Passport series. Last year's in-depth focus on the cuisine and culture of Argentina was such a rousing success it gave birth to the annual event. From Wednesday, May 11, through Tuesday, May 24, Pasaporte España will showcase the food, wine, and culture of Spain, currently one of the hottest and most influential culinary regions in the world. Customers can take classes with Spanish chefs working on the cutting edge of molecular gastronomy, attend wine tastings with award-winning Spanish vintners, and shop for prepared foods and imported products in many departments representing the enticing flavors of Spanish cuisine. See details and schedules at www.centralmarket.com. 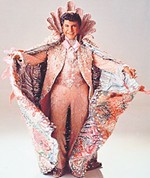 Gay Place: Liberace Was Gay???
Adelina Anthony comes back to town, and Liberace on the radio 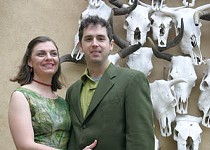 After a Fashion
Stephen goes west, sees some big rocks, and only adds to the splendor of the Marfa lights…