New India Cuisine gives South Austinites an option for Indian in the neighborhood, while the people-watching is solid gold 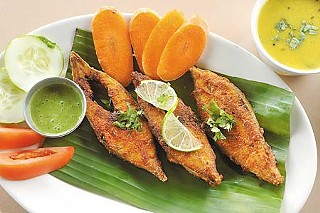 
Originally, New India Cuisine was located in the strip center east of the H-E-B on South Congress, south of Oltorf. It moved to a new location just north of Oltorf, next to the Victorian Wells Fargo manse-bank for better exposure, and it worked. New India specializes in the cuisine of Malvan and Konkan, on the western coast of India, just north of Goa and south of Mumbai. While the foods of the area aren't particularly vegetarian-oriented, the menu at New India definitely leans heavily toward vegetarian and healthy, with seafood, chicken, and a very light dose of lamb thrown in for good measure.

The menu codes dishes that are vegan and gluten-free, as well as those with nuts and those containing kokam, a reddish-plum-colored, antioxidant-rich mangosteen relative that tastes fruity and tart, not unlike tamarind or amchur (dried green mango). New India uses vegetable oil and no animal fats, and even its naan breads are yeast-free. It sounded kind of scary to me. Now, normally I would shy well away from any restaurant that advertised the "V" word so prominently, or one with such healthy pretensions, but it being Indian food, I was intrigued. Besides, I love Goan food, and there's no other place in town that concentrates on the area.

The open kitchen occupies a small corner of the room, which seats perhaps 50 or so. Decor is simple and understated, with booths on the edges and tables in the middle. Music can be smooth jazz or low-key ethnic Indian. A chalkboard near the door advertises daily specials. The big shocker is that New India makes the best potato knish in Central Texas, although the restaurant calls it a wada ($4), served with tamarind and cilantro chutneys. Excellent, and who knew?

A lentil-garbanzo soup ($3) on the first visit fared much better than the bland chicken-ginger soup on the return visit. Chicken lollipops ($7) are a nice starter: The leg meat is scraped up the bone to the tip, it's battered, deep fried, then served with a spicy and tart tomato relish. The veg puff samosa ($4) brings two baseball-sized "puffs" that are heavy with a tasty filling of spiced potato and peas; the pastry is dense and hard to cut, so we scooped it out like a British pie of olden times.

Although we didn't get it, New India's vegetarian thalli platter seems to be a hit: $9 for five vegetables, achar pickled salad, papad, kokam curry, dessert, and naan or chappati. We did try several entrées during two separate visits. Kheema masala ($10) is best described as ground-lamb helper, Indian-style. The flavors and spicing were excellent, but the texture angled a little toward the sloppy joe side. Still, served over its rice (and every single grain is separate, as it should be) it makes a nice combo. The chicken vindaloo ($10) was only mildly vinegary with sparse heat; both could have been jacked-up (and we asked for spicy). On this visit we tried the Peshawari naan ($2), filled with raisins and nuts, and the garlic naan ($1.75). Both were nicely charred on the bottom, flaky, and superb.

We ordered three entrées on the second visit, requesting and receiving spicy with everything. The eggplant with black-eyed peas ($9) was nice, with a raisiny sweetness hovering in the background. The Malvani coconut chicken curry ($10) was interesting: tart and fruity, complex and spicy, with grated fresh coconut meat. The chicken korma ($10) is the classic creamy nut sauce, which could have had more richness and layers of flavor. The naan on this visit impressed less; kheema naan ($3) had only a light schmear of lamb around the edge, and the onion naan ($1.75) tasted only subtly of onion.

For the target demographic, namely the SoCo/SoATX hipster, vegan, or pesco-pollo vegetarian, New India brings huge smiles; for the North Austin serious spice-craving carnivore, not so much. It does give South Austinites an option for Indian in the neighborhood, and the people-watching is solid gold.