No, no – the other kind of pasties 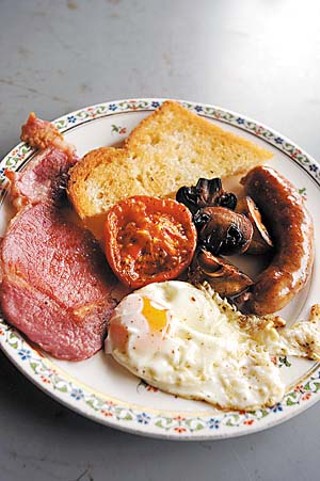 
Alice and Shadrach Smith, the husband and wife behind the locavore-friendly Full English brand, already have a burgeoning reputation through their market-sold traditional British sweet treats. Now their humble attempt to introduce Austin palates to English food has a permanent home. Tucked behind the Manchaca Food Mart and near South Austin's other bastion of northern European cuisine, the admirable BakeHouse, Full English Cafe summons the spirit of the great British institution of the greasy spoon. That sounds off-putting, but the independently owned diners are really the last bastions of homemade, handmade, working-class grub. No nouvelle cuisine here: The small but concise Full English menu favors the British tradition of fried goodness.

Appealing as the three-course spring special high tea ($15) sounded, the shepherd's pie with salad ($5) seemed more in keeping with the setting. Not only did it taste homemade, with finely minced lamb, carrot, and a dash of pepper, but it also had all the little hallmarks, like the fork tracks running through the perfectly browned mashed potato topping. Yet the real test of any greasy spoon is the grand British butty. As I thumbed through a battered copy of Derbyshire Life and Countryside, there was the distinctive herbed aroma of a traditional banger, and the sizzle of cooked-to-order bacon. It smelled right, and it sounded right, but when the butties arrived ... Oh gosh. Oh goodness. The bacon butty ($5) was a griddled roll, lightly coated in butter, surrounding a mound of thick-cut farmhouse-style bacon. Perfectly balanced between crispiness and succulence, a dash of HP Sauce (the tamarind-based mainstay of the British breakfast table) completed the moment. One quick word: Add nothing to the banger butty ($6). The two thick, British-style sausages, fried to within seconds of their skin popping, are too perfectly complemented by caramelized onions to change anything. Good enough to be a dessert by themselves, the onions were a perfect balance to the meat. Rule Britannia, and pass the Marmite. 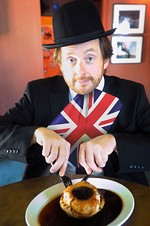 What's a Hungry Brit to Eat in Austin?
It may not be Mum's bubble and squeak, but it's close