Tweet
print
write a letter
Local chefs are in the news. Congratulations to chef Bryce Gilmore of Barley Swine and Odd Duck Farm to Trailer, who was recently named one of the Best New Chefs of 2011 by Food & Wine magazine. He's the fourth Austin chef to be awarded this distinction in the past dozen years. Also new at Barley Swine: the recent addition of pastry chef Kyle McKinney.

Haddingtons (601 W. Sixth) announced the hiring of new Executive Chef Jim Corwell, who comes to Austin after stints at some of the top restaurants in New Orleans. Look for Corwell to revamp the menu, adding some lighter, European-inspired bistro dishes to the classic American/British tavern fare.

Carlos Rivero is pleased to announce that chef Alma Alcocer-Thomas, formerly of Jeffrey's, Fonda San Miguel, and Tacos and Tequila, is now executive chef for the El Chile Restaurant Group. "Alma did some recipe development and chef training for us in the beginning, and now we're pleased to have her as part of our team going forward," said Rivero.

Brad Sorenson is culinary director of the new Silver Whisk Cooking School (1501-C RR 620 N., Lakeway, 512/826-8841, www.silverwhiskcooking.com), which had its grand opening ceremonies last week. The Asti alum has competed on both Food Network Star and Chopped All-Stars within the past year... And speaking of reality cooking-show contestants with local ties, we're told that Joey "Saucy Balls" Gal­luzzi, a current contestant on NBC's America's Next Great Restaurant, is pursuing his culinary passion as a student at the local Le Cordon Bleu College of Culinary Arts.

Artisan bread baker David Norman will be a key member of the staff of Easy Tiger (709 E. Sixth) when the coffee shop, artisanal bakery, and beer garden concept opens along Waller Creek some time in May. Other principals in the new venture are 24 Diner Executive Chef Andrew Curren and sommelier Billy Caruso.

In the wake of the fire that has temporarily closed Sagra Enoteca & Trattoria (1610 San Antonio), chefs Sarah McDonald and Parker White are still on the payroll but are picking up volunteer shifts with local nonprofits until the restaurant reopens. In the spirit of neighborliness, the new Dive Bar & Lounge (1703 Guadalupe) will host a benefit for Sagra's servers and bartenders to help them while they're out of work: Saturday, April 16, 4-8pm.

Jodi Bart is one of eight finalists in a national contest to send a North American food blogger on a European culinary vacation, sponsored by Whole Foods. The public can vote for their favorite contestant through Friday, April 15. See Bart's video and the voting page at her blog, www.tastytouring.com.

Chefs from several local restaurants will lend their cooking talents to the farm-fresh culinary offerings this weekend at the second annual East Austin Urban Farm Tour. Visit Boggy Creek Farm, HausBar Farms, Springdale Farm, and Rain Lily Farm for tours and tastings of local foods, teas, and spirits. Proceeds benefit the Farm and Ranch Freedom Alliance. $35; tickets available at any farm on the tour or at www.farmhousedelivery.com. Sunday, April 17, 1-5pm. 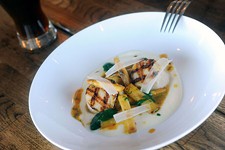 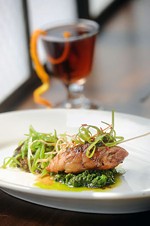