Tweet
print
write a letter
The 2011 edition of the Texas Hill Country Wine & Food Festival was one of the best fests in years – events ran smoothly and were well-attended, food and drinks were plentiful, and all the guests I encountered were very happy.

• Chefs at the Stars Across Texas Classic presented an eclectic array of comestibles: edible spring flowers blooming out of pâté cups and deconstructed carrot cake served with Easter eggs full of carrot puree from Uchi/Uchi­ko; a sliver of scallop on refreshing sauces from Jason Dady of San Antonio; bites of quail deep-fried to order with honey sauce from John Besh's Lüke, which garnered the longest lines of the evening; Rebecca Rather's luscious honey panna cotta with blood-orange sorbet and candied kumquats; and earthy dark-chocolate-and-wild-mushroom truffles served on sticks and wrapped in smoked-cedar cotton candy from Katherine Clapner's Dude, Sweet Chocolate.

• Friday night's Live Fire! party at the Texas Disposal Systems Exotic Game Ranch was my favorite of the weekend. The best thing I ate was a beef tenderloin taco with chipotle sauce, tangy Mexican crema, and bright, homemade pickled vegetables by chef Rene Ortiz of La Condesa, followed closely by Lamberts' corn sopes topped with smoky, barbacoa-style short-rib meat and an astringent slaw of cabbage, radishes, and apples. The longest lines that night were for the excellent fatty brisket from Franklin Barbecue, prompting pit master Aaron Franklin to assure guests he's building two more big brick pits at the new restaurant so as not to run out of meat so early. Aimee Olson's fresh blackberry Brown Betty with vanilla-bean ice cream made the perfect sweet ending to that big, beefy meal. The Salt Lick's Scott Roberts and Jay Knepp were busy introducing their new chef, George Jacques, to the crowd. Look for Jacques to develop wine-friendly menus for special events at Thurman's Mansion.

• According to several people I spoke with afterward, it appears fest organizers have finally found the right venue for the Sunday Fair. Guests and Chronicle contributors alike described the Mexican American Cultural Center as a wonderful setting for a party attended by 2,500 folks – shady seating around the pavilion, interesting vendors, an air-conditioned auditorium for cooking demos, and more than enough food to balance out the drinks. Congratulations to the festival organizers on a job well done – and a big shout-out to the folks at Zandunga Mexican Bistro, who won Sunday's hotly contested taco challenge!

Kudos to Kathryn Hutchison and the army of local bakers and volunteers who helped her make Austin Bakes for Japan a rousing success. At press time, the total raised for AmeriCares was a mighty sweet $11,540... And speaking of food-related benefits, Kristin Burke has written a ­fundraising cookbook to help her Austin friend John Johnson cover the costs of his battle with pancreatic cancer. If you're interested in vegan cooking in support of a very good cause, you can purchase I Wanna Be Your Vegan at www.blurb.com/bookstore/detail/2014905.

Sagra Enoteca & Trattoria chef/owner Gabriel Pellegrini hopes to have the restaurant back up and running within a week after a fire that caused an estimated $100,000 in damages on Sunday, April 3. We'll keep you posted. 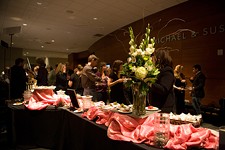