Texas Takes on the World When the invitation to judge at the first Texas Olive Oil Tasting & Contest – Texas vs. the World – landed on my desk, I was immediately intrigued. The blind tasting is scheduled for this Saturday, March 26, at the North Lamar Threadgill's location and will include olive oils from Texas, Mexico, Argentina, Italy, and Spain. The idea of pitting a new product from America against established Old World contenders reminded me of another historic tasting in the early Seventies. That time, brash, young vintners from California entered a red wine from Stag's Leap and a white from Chateau Montelena in a prestigious blind tasting in Paris. The California wines showed well enough against the French competition to deliver some much-needed international credibility to the then-fledgling California wine industry. I asked Jim Henry, olive rancher and founder of the Texas Olive Oil Council, if establishing an international reputation for Texas olive oil was part of his plan for this tasting. "I know that wine story, too, but that's really not my goal at this point," he said. "Right now, we're just trying to build an industry and make people aware that olives really can grow in Texas. We've invited some producers from around the world to join in the fun." 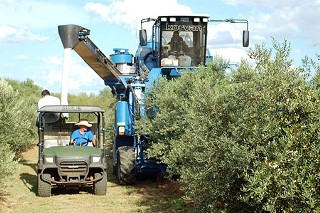 The event looks to be a fine coming-out party for Texas olive oil as well as an opportunity to celebrate the bountiful harvest of 2010, the best year yet for Texas olives. Several Texas olive growers will be in attendance, eager to share information about Texas' newest cash crop and the healthy, delicious liquid gold it produces. The Threadgill's kitchen will prepare down-home specialties with Texas olive oil, tasting stations will be set up around the room, and a panel of judges will evaluate oils in two categories: large commercial producers and smaller estate bottlers. After the judging, the crowd will view a rough cut of El Camino – The Texas/Mexico Olive Oil Trail, a documentary by San Antonio filmmaker Bill Millet. Then Grammy-winner Joel Guzman and his band will present a set to cap off the evening's entertainment. Agreeing to participate in the judging at the event piqued my interest in the development of Texas' newest culinary industry. Here's some of what I've learned. The modern Texas olive oil industry dates back less than 20 years, but it started when industry pioneer Jim Henry discovered small stands of thriving olive trees that were planted in the early and mid 20th century in Texas' Winter Garden and Coastal Plains regions. The discoveries convinced him that olives could be a viable crop in those areas. The Winter Garden area includes several counties south of San Antonio situated atop the Carrizo Aquifer. In the late 19th and early 20th centuries, those counties were covered with family farms and ranches. The winters were mild and the water relatively accessible. Farmers raised spinach, onions, peanuts, strawberries, and other crops, and shipped them to market by rail.

But the area began to change during the Depression. The water table dropped, making water less accessible and much more expensive. Consumers became accustomed to buying fruits and vegetables shipped in from California, Mexico, and Florida. The finances of operating small family farms became untenable, and many landowners left the farms for better-paying jobs. Although plenty of agriculture remains in the area (spinach around Crystal City, strawberries around Poteet), some of the farmland was allowed to return to mesquite and cactus, more suited to ranching than crop cultivation. That is, until the olive pioneers arrived in the late Nineties.

Jim Henry is a bona fide Texas olive oil pioneer. On a business trip in southern Europe in the early Nineties, Henry saw land planted with olive trees that reminded him of the Texas Hill Country. He returned to Texas and began inquiring about the possibility of growing olives here. "Everyone I talked to told me their research showed that olives wouldn't survive in Texas. When I would ask to see the research, they'd admit there really wasn't any. It was just that the conventional wisdom was that olives wouldn't work here. One extension agent who is a stone fruit expert told me that planting olive trees would be romantic folly," Henry recalls ruefully.

That extension agent was almost proven correct. In his first olive venture, Henry planted several varieties of olive trees near Marble Falls in 1994. He says now that the venture didn't succeed because he'd chosen the wrong varietals and because of the Hill Country's tendency toward temperature extremes in the early spring. "Olive trees need about six weeks in March and April where they can't tolerate temperatures below 32 degrees or above 90 degrees or the fruit won't set," he explains. "You can't always count on that in the Hill Country." In 1997, Henry moved his operation to a ranch near Carrizo Springs when he discovered a small group of old olive trees behind a historic mansion in nearby Asher­ton. "The best we can tell, the trees were planted in about 1924 after the mansion was built. They've survived all these years with virtually no care – no pruning, fertilization, or irrigation – and they still produce olives. When I saw them, I knew this would be the right place," he recalls. Jim Henry's Texas Olive Ranch is now the largest commercial olive producer in Texas, with commercial harvesting equipment and a state-of-the-art Italian olive press that can process 1½ tons of olives an hour. His ranch currently boasts 40,000 Arbequina, Arbosana, and Koroneiki olive trees, with more on the way. Henry finds that Spanish varietals do best in Texas, which makes sense considering that the Winter Garden sits at about the same latitude as the historic olive-producing areas around the Medi­ter­ranean. "You can't manipulate Mother Nature or force something to grow where it's not meant to be," Henry says, adding that new agricultural research commissioned by the Texas Olive Oil Council and undertaken by the U.S. Department of Agriculture and the Texas Tech horticulture department will provide valuable information about varietal selection, orchard management, weed control, and irrigation to current and prospective olive growers.

Following the trail blazed by Henry, several other groups have planted olive groves in the Winter Garden and along the Texas-Mexico border near Ciudad Acuña. "I get calls from interested people every day," Henry reports. He says the potential olive growers often fall into two categories: retiring baby boomers who want to grow healthy food, and descendants of former Winter Garden farmers looking for a cash crop that would make recovering their long-dormant family farmland a financial reality. The TOOC plans to create a grant program primarily for Hispanic farmers in South Texas to help them convert small acreage to olive production. "The grants would be for landowners who can't afford to retrofit their irrigation wells or put up the necessary deer fences around their property. We want to help them get started," Henry says.

The Texas Olive Ranch brand is already recognizable around Austin. The products can be found on the shelves at Whole Foods and Central Market, as well as at several farmers' markets in the area. "We do 20 farmers' markets every Saturday around Texas," Henry says enthusiastically. "It provides us with valuable customer research we couldn't pay for and also gives us the opportunity to educate the public about the health benefits and great flavor of our olive oil." In fact, the whole locavore, farm-to-table, healthy food movement of the past few years couldn't have come along at a more opportune time for the nascent Texas olive oil industry. According to statistics provided by the TOOC, the annual U.S. olive oil production is 350,000 gallons – less than 1% of the 50 million gallons of olive oil consumed in this country every year. That would seem to indicate there is a ready market for every olive grown in Texas. And with consumers looking for healthy food grown closer to home and many chefs focusing on local products, the future looks golden for Texas olive oil. Drop by Threadgill's on Saturday and taste for yourself.