Good food to get you in the mood for Mardi Gras

Tweet
print
write a letter
Over the years, the number of Cajun and Creole restaurants in Austin has waxed and waned, but it's now at an all-time high. In researching this story, we found more than 20 eateries with some kind of Cajun or Creole inclination on their menus, indicating that a full five years after the post-Katrina diaspora, the Austin metro area is still awash in the distinctive flavors of the Crescent City and Acadiana in places such as the MoJoe Room Bar & Grill, which offers a hearty menu of po'boys, gumbos, and étouffées, and Hot Boiled Pho & Crawfish, a fusion joint that perfectly demonstrates the most recent culinary influence of immigrants along the Gulf Coast. There are fine-dining outlets and crawfish shacks, oyster bars, pizza parlors, and popular neighborhood joints from far South Austin to the northwestern suburbs. In preparation for Mardi Gras on Tuesday, March 8, we're showcasing eight Cajun/Creole restaurants, some new places as well as some blasts from the past. Look for even more in "Cajun Roulette." Grab some beads at the Mardi Gras parade this weekend, and find yourself some place to celebrate with authentic bayou cuisine. 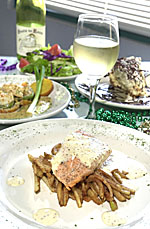