If you bite the baby, you buy the next one 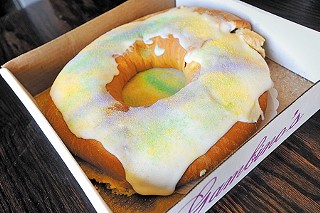 In New Orleans, King Cakes are a regular feature of the carnival season, showing up for the Feast of the Epiphany (Jan. 6) and holding a place of honor at parties and celebrations through Mardi Gras, the Tuesday before Lent begins (March 8 this year). The brightly decorated crowns of sweetened yeast dough or flaky puff pastry have a baby (representing the Christ child), a bean, or a coin baked into the dough, and the person who finds the treasure in his or her slice is responsible for providing the King Cake at the next party. Though Austin doesn't celebrate the entire carnival season as yet, King Cakes are growing in popularity and can be purchased at the following local businesses with 24 hours notice.

Bakerman's Patisserie and Chocolatier (120 E. Seventh, 476-0060) The New Orleans-style sweet yeast dough cakes are filled with traditional cinnamon-sugar; napped with frosting that is dusted with bright green, purple, and gold sanding sugar; and topped with plenty of Mardi Gras beads. Half-sheet, $13; full sheet, $23. This year, Bakerman's also has King Cakes with cream cheese or apple filling for $18 and $28.

Cypress Grill (4404 W. William Cannon, 358-7474) This popular Cajun/Creole restaurant imports King Cakes from the legendary Gambino's Bakery in New Orleans every week. Enjoy slices with your meal, or order a whole one to take home.