Takeout gets the highbrow treatment 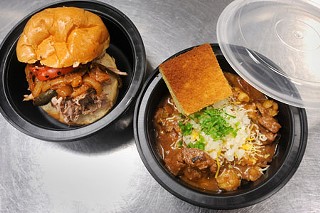 
We live in the increasingly urbanized Bee Caves/Spicewood area, which has just recently become rich with good-quality takeout. We have everything from the signature Chinese cuisine of Pao's Mandarin House to the Artisan Bistro's perfect re-creations of cozy French cuisine. Zoot, one of Austin's longest-standing fine-dining restaurants, recently made a few additions to its normally high-end menu that are huge bonuses for anyone yearning for the elusive opportunity to have food that is convenient, reasonably priced, and tasty.

This isn't a complete change in philosophy for Zoot. It's still a white-tablecloth fine-dining restaurant, but the folks at Zoot got clobbered by two changes at the same time. First, they moved from their longtime location on Hearn Street to the outer reaches of Bee Caves Road. Eighteen years at the old location was a tough habit to break for even their most dedicated customers. And then, between the time they decided to move and the time they actually relocated, we went from a seemingly thriving economy to one in the doldrums. The change in location and in their customers' bank accounts meant that Zoot's owners needed to get creative.

So they took a look at their new surroundings, and what did they see? Families with young children to their east and retired folks to their north and west, all with at least some spare money. That meant they needed to add some menu items that would work as takeout food. The question was how to do it without damaging their hard-earned reputation as a fine-dining restaurant.

Their decision was to offer foods they could sell at a reasonable price and still be proud of – classic foods that everyone would understand, prepared with the care for which Zoot is already famous. A perfect example from the regular menu is the "3 Napkin Burger" with aged cheddar, onion jam, coleslaw, and fried buttermilk onions ($10). A burger at Zoot? Just having the two words in the same sentence would have been unthinkable in the days before the stock market flopped. But, of course, the market did flop, and now Zoot's owners are skillfully adapting by offering bargain hunters these stunning onion rings and a huge, juicy burger made with all the skill and high-end ingredients their serious kitchen could bring.

Even better is Zoot's new conceptualization of mid-20th century comfort food. Tuesday through Sunday, it offers two meal choices in microwavable dishes with generous servings for $11 per person. These are archetypal dishes, so familiar you often find them in cafeterias, but created with exceptional care. Recently, Zoot offered a choice of King Ranch chicken casserole with sides of pinto beans and Spanish rice or spaghetti Bolognese. Instead of the gloppy Spanish rice you'd get at a fast-food place, this was perfectly cooked with nice individual kernels and a hint of vanilla aroma. The casserole was moist and filled with high-quality ingredients, and the Bolognese had a rich sauce that had obviously spent some time simmering on the back burner, as well as a generous amount of fork-tender meat. If all this isn't enough, you can also add a salad for $6 or a dessert for $8.

Zoot is offering folks a chance to get all the quality and care the kitchen normally provides and to take home wholesome, tasty food for about the same price as an anonymous chain place staffed with bored minimum-wage kids working the kitchen. The economic downturn has been painful, but it sparked some welcome creativity at Zoot. Its takeout is an appreciated addition to our arsenal of dinner options.