Cirkiel shifts his command to the backspace 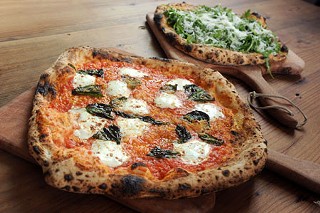 
Some chefs are clearly having so much fun doing the things they do, it's almost enough to make you believe the late-night chef academy infomercials. Shawn Cirkiel is just such a chef; his enthusiasm is infectious, and he gives you the sly impression that working out new dishes and running a restaurant is really just code for "having an amazing blast with your friends."

While talking about installing the 2,700-pound Neapolitan brick oven in his new venue, the backspace, he confesses that he and Chef de Cuisine Justin Rupp had barely gotten it in the door before they began experimenting. "Long before the surround was bricked in, we were already firing it up. We just couldn't wait to find out if we could make what we were going for," he relates. "We would just stay up all night after work; it was so fun. And the greatest part was, we could! It didn't even really take that long before we were getting it just right."

What he was trying to get right was rustic Neapolitan-style pizza, made in a custom oak-fired oven that heats to temperatures ranging from 900 to 1,000 degrees Fahrenheit. At temperatures that high, it only takes 90 seconds for a pizza to fully cook, and if you leave it many seconds longer, it will burn entirely black. When you bake it perfectly, however, it is marvelous: The chewy dough is crisp on the bottom and bubbling, with a few blackened flecks and perfectly softened toppings.

The type of pizza Cirkiel wanted to make determined the oven, and the oven in turn has determined the rest of the menu at the backspace. For starters, it utterly dominates the place, which could kindly be termed "cozy" or, let's see, "intimate"; the backspace is, literally, the "back space" of the building that houses parkside at Sixth and San Jacinto. This area of the building was, decades ago, a run-down diner, and the room still boasts the diner's ornate pressed-tin ceiling. The door opens directly onto San Jacinto Street as the diner's once did; you don't have to walk through parkside to get there. The roaring, thousand-degree fire of hardwood oak is visible from every point in the narrow room, and with all that heat and energy, it would be insane to cook anything anywhere else – and besides, there isn't anywhere else. So the menu inclines to dishes quick-roasted in cast-iron vessels in very hot ovens ... and, of course, pizza.

The antipasti are described on the menu in the typically frank Cirkiel way, by a listing of ingredients. The roasted fingerling potatoes with salsa verde ($5) are purple, marble-sized potatoes, covered with a fresh, bright-green salsa. The potatoes are so small and the sauce so green that at first you might think you've been served olives by mistake. The quick roasting of the superheated oven makes short work of the tiny things, so they're creamy and hot even though their skins remain unbroken. The absolutely luscious baked ricotta and poached tomatoes with olive oil and lemon ($7) uses local ricotta made in Bryan, Texas, and is served with thick rectangles of toasted bread. The roasted sprouts, pancetta, and Pecorino Romano ($6) was the crowning glory of my visits, however. Halved brussels sprouts, quick-roasted to caramelized tenderness with crisp Italian bacon and cheese – once you've had brussels sprouts prepared like this, you will never want them cooked any other way.

The salads are good and a nice break from the piping-hot nature of the rest of the menu. Farm greens with giardiniera, red onion, herbs, and Pecorino Romano ($7) is the more classic of the two, with pickled peppers and finely chopped cauliflower and carrots. The roasted beets with pecan, citrus, fennel, and frisée ($7) are a bit more earthy and interesting; the flavor of roasted pecans with cold beets and citrus is always lovely. Both salads are heavily oiled and vinegared; if you prefer light dressing, be sure to request it.

The pizzas are the drawing card and are thought by many to be the best in town. The dough, in order to not burn on the brick floor of the oven, has to be wetter and lighter then typical pizza dough. To develop robust flavor, the dough is proofed for three days before use. Cirkiel and Rupp started developing a sourdough starter for it seven months ago; fitting the backspace up to be a restaurant took more than a year, so they had plenty of time. The pizzas are smaller than a delivery pizza, one being about the right amount of food for two people. The toppings are superb, and the combinations are classic: Margherita ($9), marinara ($9), bianca ($14), pepperoni ($12), white anchovy ($12), mushroom and ricotta ($13), and fennel sausage and roasted pepper ($13). Be aware: If cheese isn't listed as an ingredient, there will be no cheese. Cheese is not assumed.

The desserts – tiramisu, ricotta cheesecake, and hazelnut chocolate budino (each $5.50) – are all flawless. The wine list is entirely Italian, as is the one and only beer served, Peroni. Although Cirkiel was at pains not to give the backspace a one-word Italian name and to source (especially cheese) locally, the backspace is about as authentically Italian as you can get without hopping on a plane. 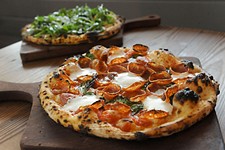