Tweet
print
write a letter
In the off with our heads department, in a recent review of Black Star Co-op Pub & Brewery, a dish was mistakenly identified as veal shank, but actually it was a pastured, humanely raised beef shank from Windy Bar Ranch near Stonewall. We regret the error.

Longtime Austin chef Raymond Tatum, who developed a loyal following over the years at Jeffrey's, 612 West, Jean-Pierre's Upstairs, and the Backstage Steakhouse, has now struck out on his own. Tatum's Three Little Pigs trailer is conveniently located under a shade tree across the parking lot from East End Wines (1209 Rosewood). That should make it easy for folks to enjoy Tatum's multiethnic, pork-centric dishes at planned wine tastings on the store's patio later this spring. Three Little Pigs is open Tuesday-Saturday, from 4 to 10pm.

Another chef with an enthusiastic following is also in a new situation. John Galindo served as executive chef at his family's Cedar Grove Steakhouse in Wimberley and NoRTH restaurant in the Domain before joining the trailer trend with Izzoz Tacos in South Austin. When Galindo lost the lease on his trailer spot at the end of 2010, he closed that business and signed on with Carlos Rivero's El Chile restaurant group, where he's now the chef at Red House Pizzer­ia (1917 Manor Rd., 391-9500). Galindo is expanding the small and large plate options on the Red House menu with items such as chicken-fried meatballs and seasonal bruschetta. Red House is also making some changes at happy hour, offering half-price appetizers and drink specials daily from 5 to 7pm and at the new late-night happy hour from 10pm to closing. Be sure to check out the new Western-themed cocktails created by mixologist Rachael Davis. And just FYI – the Galindo family secured a lease on another spot, and Izzoz Tacos (1503 S. First, 326-4996, www.izzoztacos.com) is back in business.

The Texas Hill Country Wine & Food Fest­iv­al is scheduled to take place March 31 through April 3. Festival Chair Cathy Cochran-Lewis announced the 2011 program lineup at a media party last week. The festival opens with the popular Stars Across Texas grand tasting at the Long Center, and other highlights of the 26th year of the event will include an appearance by actor/winemaker Kyle MacLac­hlan, the Live Fire! Beef Supremacy celebration at the Texas Disposal Systems Exotic Game Ranch, a Maker's Mark cocktail competition, a craft brew and cheese pairing party, and the Sunday Fair, newly relocated to the grounds of the Emma S. Barrientos Mexican American Cultural Center on Lady Bird Lake. The complete program and tickets are available online at www.texaswineandfood.org.

Foodways Texas, a new grassroots organization dedicated to studying, documenting, and celebrating the diverse food culture of Texas, is hosting its inaugural symposium Feb. 25-26 in Galveston. The Gulf Coast Gathering will focus on the edible heritage of that rich culinary region with a day of lectures, meals, and demonstrations. Check out the full symposium schedule, find hotel recommendations, and buy tickets at www.foodwaystexas.com. 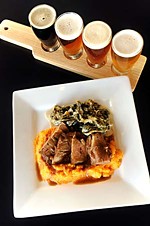