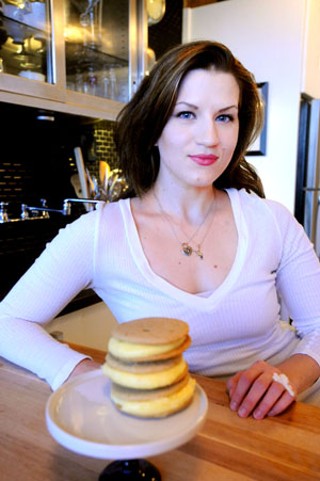 There was a time when so little was generally known about gluten intolerance that sufferers of celiac disease hardly dared to eat at restaurants. But as the number of people affected by celiac sprue has skyrocketed, due in part to more accurate diagnosis of the condition, restaurants are becoming more knowledgeable about the disorder and increasingly able to accommodate those affected by it.

Essentially, those suffering from gluten intolerance and celiac disease cannot ingest wheat, barley, rye, or any other grain containing the gluten protein. In some cases even the tiniest speck of gluten can result in serious gastric distress and allergic inflammation lasting for days. Avoiding foodstuffs obviously made with wheat is not enough; professional cooks often use wheat flour to make roux, thicken sauces, add body to soups, and dredge meats prior to sautéing or grilling. In order to safely feed the gluten-intolerant, chefs must learn to avoid all the many ways that gluten can sneak into food (including the use of prepared products, such as soy sauce, which is usually made with both soy and wheat).

Fortunately, there are dozens of grains that are perfectly safe, and many chefs are switching to these – corn, quinoa, arrowroot, rice, and chickpea flour, among others – to thicken sauces and dredge meats and seafood. In the process, menus are becoming much friendlier to the gluten-intolerant, and there's a lot more variety out there to enjoy.

So much so that it's impossible to list every place in town that is willing and able to cater to the gluten-intolerant. Many Austin restaurants have dedicated gluten-free menus, myriad gluten-free menu items, and even kitchens that are entirely gluten-free, but that's just the tip of the iceberg; if there's some place you'd like to try, give them a call and ask the manager or chef if they can accommodate your dietary restrictions. You'll be surprised at how many of them are both knowledgeable and eager to assist.

For my research, I asked several of Austin's most prominent gluten-free lifestyle experts – Sarah Rodenberg (www.glutengirlinaustin.com), Karen Morgan (www.blackbird-bakery.com), and Jessica Meyer (www.atxglutenfree.wordpress.com) – what restaurants they would recommend from their own experience as being reliable, as well as appropriate for a romantic Valentine's Day celebration. I then followed up by talking to the chefs and restaurateurs to make sure that the information was accurate and up-to-date. The resulting list of 24 restaurants is in "Highfalutin Without the Gluten Roulette."

Generally speaking, the finer the dining (and by that I unfortunately do mean the more expensive a place is), the more likely you can safely eat a glorious, memorable, gluten-free meal. Names that came up repeatedly include TRIO at the Four Seasons, Uchiko, parkside, Wink, Eddie V's, Fino, Asti, the Carillon, and La Condesa. There are many midrange places, however, that are stepping up: Chez Zee, Eastside Cafe, Corazon at Castle Hill, Kenichi, Gumbo's of Westlake, Mirabelle, and Fonda San Miguel all merited several mentions as well. Some of the favorites on the less-expensive end of the continuum include Maudie's, the Steeping Room, the Brick Oven Restaurant on Brodie, and Las Palomas.

At least four local establishments will be hosting Valentine's dinners with special prix fixe menus tailored to the gluten-intolerant:

• For celiac sufferers who are extremely sensitive (and some can have a violent reaction to even a few parts per billion of gluten), Wild Wood Art Cafe, Austin's first entirely gluten-free bakery and restaurant, will be hosting a "gluten-free gourmet" Valentine's dinner on Saturday, Feb. 12. Entrée choices include grilled red snapper with beurre blanc, rack of lamb, chicken roulade and vegan mushroom risotto, along with appetizers, lemon soup, and dessert. Reservations are necessary, but management has kindly extended the reservation deadline an extra day for Chronicle readers.

• Beets Living Foods Cafe, best known for catering to raw food aficionados, happens to boast a gluten-free premises as well. Owner Sylvia Heisey and chef Alicia Ojeda will be putting on a special four-course Valentine's dinner – pine-nut-pilaf-stuffed dolmas, Caesar salad with carrot croutons, ravioli with macadamia cream herb sauce, and a dessert plate – for an affordable $75 per couple. Ojeda is an inspired and passionate raw foods chef, and this dinner promises to be a culinary triumph, as well as completely and utterly gluten-free (and raw!). Reservations required.

• Corazon at Castle Hill will present a three-course prix fixe menu on Valentine's Day that is overwhelmingly gluten-free (six out of seven entrées), including dishes such as roasted half rack of lamb, Moulard duck enchiladas, and beef tenderloin with a Cognac and portobello sauce. If you can't get a reservation for that night (and Corazon is often booked weeks in advance), chef Mike Taddeo assures me he'll be adding the gluten-free entrées to the regular menu for several weeks.

The options for a lovely, gluten-free Valentine's dinner out at a romantic restaurant have never been so plentiful! Wine of the Week
Wines for lovers