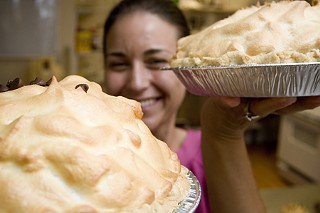 1) French buttercream-filled macaroons These colorful, dainty, light-as-air almond pastries used to be the domain of exclusive Parisian sweets shops, but now you can buy them all over Austin, at La Boîte, La Patisserie, Enoteca Vespaio, and elsewhere.

2) Burrata cheese Having gone from a cheese that no one had ever heard of to one that's everywhere, burrata is making a regular appearance in this year's favorite recipes. Look for burrata made by Gioia at Antonelli's Cheese Shop.

4) Pork Belly The lowly pork belly has become the poster pin-up at many fine restaurants across the city. The Carillon, El Arbol, East Side Show Room, and Wink, among others, have offered examples of how melt-in-your-mouth good it can be.

6) Exotic cocktails The exotic cocktail trend is hardly new, but it's shown no sign of slacking in 2010. This year, caipirinhas and pisco sours are getting in on the act next to decadent absinthe concoctions.

7) Organ meats and marrow Sweet­breads, hearts, kidneys, and marrow are making a showing on Austin menus like never before, and we are licking our plates clean.

8) Game meats For years, lamb or quail were the most exotic meats on most menus; now Austin diners are ordering rabbit, boar, buffalo, guinea hen, and venison with surprising savoir faire.

9) Farro This whole grain is similar to spelt but has a nuttier taste and crunchier texture. More healthful than rice, chefs are using farro in pilafs, salads, sides, or as a substitute for risotto with regularity.

10) Pies Homely pies are making a comeback (did they ever really leave?) in a big way in bakeries and restaurants. Not surprisingly, it's the most old-fashioned flavors – buttermilk, rhubarb, coconut cream, and mincemeat – that are getting the most attention.