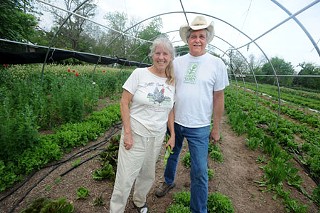 This list could easily be two or three times as long, seeing how many local food celebrities we have in this town! These people are not only famous and/or influential, but they also take an active part in Austin's food scene by gracing various gatherings with their presence.

1) Addie Broyles Food journalist and regular columnist for the Austin American-Statesman, she's also a leader in the Central Texas blogging community and one of the top food writers on Twitter.

3) Marla Camp The owner and publisher of Edible Austin, organizer of Eat Local Week, and a member of the Sustainable Food Policy Board is a driving force in the local food scene.

4) Tyson Cole The executive chef and owner of Uchi and Uchiko generates a massive amount of well-deserved national acclaim for the Austin restaurant scene.

5) Patricia Sharpe Executive editor and restaurant columnist for Texas Monthly, Sharpe's writing appears often in other, national publications as well. She's been covering the Texas food scene for more than 30 years and is super knowledgeable, sweet, and charming and has a lot of clout.

6) Carol Ann Sayle and Larry But­ler The groundbreaking farmers of Boggy Creek Farm are frequent hosts of local food events and regular contributors to local food organizations; these two are in many ways the face of the local farm community.

8) Suzanne Santos The director of the Sustainable Food Center Farmers' Market works to connect local farmers to local markets, and she organizes three of Austin's most successful farmers' markets.

9) Jim and Kay Richardson The owners (and farmers) of Richardson Farms give generously of their time and substance to local events and provide many of our finer restaurants with pastured pork, beef, turkey, and eggs.

10) Bakers Alain Braux and Barrie Cullinan Braux has authored two recent cookbooks and is a leading light in both the French baking and gluten-free communities here in Austin. Cullinan's star is on the rise as well: She just received national recognition in the pages of Bon Appétit!