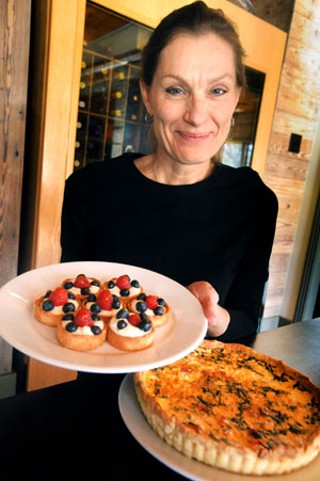 I discovered the Cake & Spoon baking com­pany booth at the Downtown Farmers' Market one Saturday morning in 2009. I came away with scones, shortbread, a cinnamon bun, a small quiche, and a luscious lemon-curd tart, plus the nagging feeling that I recognized the tall, thin woman working the booth from somewhere. During a follow-up call to rave about the delicious baked goods, I got reacquainted with fellow baker Melissa Brinckman, and we reminisced about how our paths had often crossed in Austin's much smaller Eighties restaurant community. Brinckman's career trajectory into the food business started when she was an administrative assistant at Texas Monthly in the late Seventies, and the job brought her into contact with a group of young chefs and restaurateurs who were just beginning to make their mark on the local dining scene. At first, Brinckman picked up hostess shifts at eateries such as Basil's after days at the office, but she eventually gave in to the allure of the restaurant world and went to work at Green Pastures Restaurant. "I started in the savory kitchen there for about $5 an hour and then moved into the bakery. Working for two years with a pastry chef named Andy Cook who had graduated from the CIA was really good training," she recalls. Over the next 20 years, Brinckman would work in several Austin kitchens, honing her skills and learning from chefs and co-workers along the way. She also drew inspiration from such authors as Maida Heatter (a shared heroine), Gaston Lenôtre, Julia Child, Jacques Pépin, Wolfgang Puck, Alice Waters, and Nancy Silverton.

In 2004, Brinckman went to work for Tracy Claros, who was just getting her Sticky Toffee Pudding Co. off the ground. The Eng­lish­woman was an accomplished home cook with some good recipes and a business vision; Brinckman was a seasoned baker with years of commercial production experience. The working relationship would be beneficial for both women. "Melissa was with me for almost three years, and the fact that she had production experience made such a big difference in the beginning. I will always be grateful for her help and support," Claros says. Brinckman not only helped Claros turn out the puddings that would soon show up on shelves at Whole Foods and Central Market, but she also helped produce the scones, quiches, and cinnamon buns sold in Claros' original booth at the Down­town Farmers' Market. When the remarkable growth of the pudding business outgrew the need for a booth at the market, Claros encouraged Brinckman to take over the spot. "Tracy told me she was going to stop doing the market and suggested that I apply for the spot, really giving me her blessing," Brinckman recalls.

It took Brinckman a while to put together the money for a solo venture, locate kitchen space at Just Add Chef, and get her city permits in line. Her Cake & Spoon Baking Company debuted at the Downtown market in August 2009. Shoppers were enthusiastic about having some of their favorite baked goods available there again, and Brinckman enjoyed becoming part of the market community. "As members of the market, we're encouraged to purchase ingredients from other vendors there, so I get my eggs from Smith & Smith, I use Larry Kocurek's bacon, sausage made from Richard­son's pork, Round Rock Honey, and seasonal fruits, nuts, and vegetables from different farms. Our ingredients cost more, but we're proud of the local flavors and the quality of the product," she explains. She now operates booths at the Downtown, Sunset Valley, and Triangle farmers' markets every week. Figuring out how much product to prepare for the weekly markets is a challenging proposition. Prepare too little and some customers go away disappointed; bake too much and the goods won't hold up until next week.

Business growth recently made it necessary for Cake & Spoon to relocate, and now Brinckman and her assistant John Avila are busy baking in the 2 Dine 4 kitchen where she once worked with Claros. "We're so glad to have Melissa back here. It's great to have such a good baker in the building. She's already made some wonderful desserts for our Supper Friends parties, and she'll be baking some wedding cakes for our customers after the first of the year," says 2 Dine 4 owner Stephen Shallcross. The Cake & Spoon product line now includes rustic scones, savory quiches, delicious fruit tarts, cinnamon buns, and cookies that sell at the markets, Cafe Caffeine, and the Zhi Tea Gallery. Brinckman's tangy key lime tarts are a big hit at Franklin Barbecue, and she fills the occasional order for dainty fresh-fruit tarts for the chef at the InterContinental Stephen F. Austin hotel. "We would actually like to do more custom baking, taking special orders for things that people could pick up at the market. That worked very well at Thanksgiving," Brinckman asserts.

For now, she's satisfied to continue learning her craft and working in synergy with other food artisans at both the markets and the kitchen. Her long-term dream, however, does include a little retail space to call her own. As long as she's selling those lemon tarts, I'm there. – Virginia B. Wood

I first became aware of Barrie Cullinan's work when she was the head baker at Enoteca and Vespaio. Her almond croissants, colossal in size, yet light as air; her rich and flaky fresh-raspberry-and-crème-anglaise napoleons; her pistachio-studded cannoli – they were all a cut above the offerings of rival bakeries and restaurants. I lamented when Enoteca stopped offering breakfast and the pastries that defined it, and it wasn't until I stopped into La Boîte more than a year later that I recognized her work in its bakery case. I must emphasize that point: Upon tasting the croissants at La Boîte, I actually recognized them as the work of a particular baker! That's how talented Barrie Cullinan is: You cannot mistake her work for that of a lesser pastry chef. Her touch is unmistakable.

Educated at Peter Kump's New York Cooking School (now the Institute of Culinary Education), Cullinan originally thought she'd be following the traditional chef career path. "I did the whole culinary program, but I found myself increasingly interested in baking," she relates. "Which is funny, because I was originally a little afraid of it! After I graduated, I went to work for Claudia Fleming at Gramercy Tavern, and it was she who really inspired me." Fleming, named the 2000 Pastry Chef of the Year by the James Beard Foundation, recognized Cullinan's talent and was very sorry to lose her when Cullinan moved to Texas in 2001.

After a brief stint at Quack's, she was hired by Vespaio as head baker in 2003. There, she baked her fabulous pastries and oversaw the work of five other bakers until 2008. When she left Vespaio, Cullinan took a year off to travel and further expand her repertoire. "I went to Portland, to San Francisco, to Portland again, and to Paris and London," she relates. "At the time, I was planning to open a combination cookbook store and bakery, and I took the time to check out other businesses operating on that model." But, as the world of print media is going through, to put it mildly, a rough patch, Cullinan decided against that route and opened a wholesale bakery instead.

She sells her baguettes, ciabatta, croissants, pain au chocolate, brioche, and sandwich rolls, as well as whole wheat, rye, and honey-pecan bread from her website (www.barriebaking.com) and at several outlets around town, each of which carries a portion of her output. Jo's Coffee, La Boîte, and Zhi Tea Gallery sell her croissants and breakfast pastries; Antonelli's Cheese Shop sells her ciabatta; and Farmhouse Delivery offers nearly all she bakes, should you want it delivered. For this year's the holiday season, Cullinan is offering a Holiday Sweets Gift Box, which can be ordered online ($20) and which is filled with chocolate mad­e­leines, gingersnaps, and pistachio brittle.

What does the future hold? "Right now I am looking for a retail location," says Cullinan. "I want it to be very open and very interactive so the bakers can interact with customers, and we can have classes ... all very friendly. I want to to call it 'Amity Bakery.'" She laughs. "I've got the name; now all I have to do is find the right location!" – Kate Thornberry


At the recent Green Corn Project fundraiser, baker Barrie Cullinan shared a booth with preserves-maker Stephanie McClenny. The pairing of Cullinan's bread with McClenny's exquisite jams was sensational, prompting us to add McClenny and her work to our holiday coverage. Almost two years ago, McClenny decided to teach herself how to make preserves, focusing on locally sourced fruits, produce, and herbs. Confituras, her line of seasonal products, debuted in September at area farmers' markets, and in three short months, her spectacular jams and preserves have generated not only a slew of positive press but even national recognition: Her Texas fig preserves were chosen as a finalist at the Good Food Awards – the only Texas product to be so honored.

McClenny starts with our amazing Central Texas produce, such as red plums, blueberries, and Fredericksburg peaches and heirloom tomatoes, and makes jams, jellies, fruit butters, preserves, and confits in the Spanish and French fashions. "I don't overcook the fruit," she explains. "The preserves retain fresh flavor; they stay lighter and brighter than typical recipes." She also uses Round Rock Honey, organic local herbs, and other sustainable and organic ingredients whenever possible.

Bestsellers have included her salted-caramel pear butter, heirloom-tomato jam, and fig-and-walnut conserve. "It is hard to say what exactly my bestsellers have been, because we sell out nearly every weekend!" she laughs. Going into the holiday season, she'll be stocking cranberry-jalapeño jelly, ruby-red grapefruit marmalade, Meyer-lemon curd and marmalade, salted-caramel pear butter, and pear jam with Round Rock Honey and fresh sage (4-ounce jars, $4; 8-ounce jars, $7). Confituras can be found at the Barton Creek, Downtown, and Triangle farmers' mar­kets; Antonelli's Cheese Shop; Whip In; Breed & Co.; and La Boîte; and products are available through Farmhouse Delivery and the Confituras website. – K.T.

Market Finds
Farmers at the bakery? No, bakers at the farmers' market.