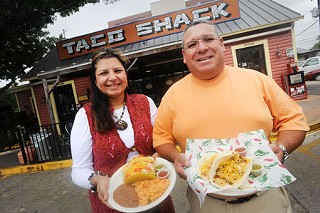 On a recent Saturday afternoon, I stood in line at the new Tacodeli on North Lamar in Central Austin. Most of the tables in the restaurant were full, and a steady stream of customers flowed in through the doors. Although it only opened a few months ago, Tacodeli is packed nearly every day for lunch. A few blocks away, at Taco Shack, things were just as bustling. A line of cars snaked around the parking lot waiting to pay at the drive-through window. Meanwhile, just a little farther north, near the Burnet Road and North Loop intersection, the newest Torchy's Tacos had just opened for business. Despite having opened only 10 days earlier, it too was abuzz with customers scarfing up Democrats (flour tortilla with beef barbacoa, onions, queso fresco, and avocado), Republicans (flour tortilla with jalapeño sausage, cheese, pico de gallo, and poblano ranch dressing), and even a Dirty Sanchez or two. Let the taco wars begin.

Tacos are nothing new to Austin. Breakfast tacos have been a part of the culinary landscape for decades now. Tamale House, Juan in a Million, Joe's Bakery, and countless other Mexican restaurants have built sturdy businesses on the simple tortilla wrapped around beans, potatoes, eggs, cheese, and bacon. But most of these places also serve a full roster of more traditional Tex-Mex and Norteño dishes. What is new are the dozens of places that now specialize in just tacos. Drive down South First or South Lamar, for instance, and you'll see what I mean. There's Maria's Taco Express, Casita Taco, Izzoz Tacos, and Papalote Taco House, to name just a few, all within a few miles of one another. And a few places, such as Torchy's, Tacodeli, and Taco Shack, have opened multiple locations, blossoming into small taco empires.

Now the three of them seem to be going head-to-head to compete for prominence in the Austin market. In the Central Austin neighborhood where I live, there are two Torchy's, two Taco Shacks, and a Tacodeli within about two miles of one another – not to mention the coffee shops, ice cream parlors, farmers' markets, and convenience stores that sell tacos from one of the three businesses. The fact is this town seems to have an insatiable appetite for tacos. They're fast and cheap, you can eat them standing up, and you can mix in lots of different ingredients and sauces to make delicious meals. For many people, myself included, tacos are a primary comfort food. But you've got to wonder, is there a limit to the number of taco stands this town can absorb?

It started with Taco Shack. In 1996, Orlando and Yoli Arriaga noticed the for-rent sign on a tiny cafe space on Medical Parkway. Yoli was working as a teacher, and Orlando was mowing lawns. They had always loved making breakfast tacos at home and thought it would be fun to open a restaurant. "It was probably a good thing that neither of us had ever worked in the restaurant business before," says Orlan­do, "because if we had known how much work it was going to be, we never would have done it." They signed the lease on the storefront and started selling breakfast tacos from the 200-square-foot space Orlando dubbed the Taco Shack. It was hard going at first – their sales that first year were barely enough to break even – but within a few years they had gained a reputation for good breakfast tacos and had a regular clientele of neighborhood residents.

Taco Shack's first expansion occurred in 1999 when the Spicewood Springs location opened. Now there are eight Taco Shacks in Austin and Round Rock. Though the Arriagas would like to continue to add stores and maybe even begin to franchise their operation, they claim to have no master plan for expansion. They took an initial loan for expansion from a bank using Yoli's teacher retirement savings as collateral, but other than that they've never had any investor funding or large loans. "We just opened them here or there" as spaces came available, claims Orlando. 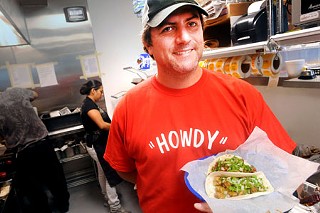 The owners of Tacodeli and Torchy's recount similar stories. Roberto Espinosa opened the first Tacodeli in 1999 with a partner, using savings and small loans provided by friends and family. It had always been a dream of Espinosa's to open a restaurant, even though he had no real experience managing them. After leaving his job in beer, wine, and spirits sales in Atlanta, he moved back in with his parents, who live in Austin. He wanted to start a place that served the kinds of tacos he recalled from his youth in Mexico City (he moved to Austin from Mexico City with his parents when he was 10). Armed with memories and a few recipes he had picked up while working as an intern at kitchens in Cancún, he began planning Tacodeli. He was lucky enough to hire some excellent chefs from Mexico and even had a contest to see who could make the best salsa. The winner was a creamy, yet fiery green sauce known as the Doña, now one of Tacodeli's signature salsas.

Tacodeli's expansion has been steady but slow, largely due to being entirely self-funded. In addition to selling his products at Austin's farmers' markets, Espinosa opened a second location in 2004 and a third on North Lamar across from Central Market just this year. Though it took a while for business to build up at its first two locations, Tacodeli has been overwhelmed with customers at the Lamar store since the day it opened. If all goes well, Espinosa hopes to open a fourth store in 2012, though he says he has no idea where that would be and doesn't even want to speculate about it.

Compared to the slower, more deliberate growth of Taco Shack and Tacodeli, the rise and expansion of Torchy's seems rocket-propelled. Michael Rypka started Torchy's with a partner just four years ago. Their first location was a trailer parked on South First Street. Rypka initially resisted the taco concept, believing the taco market was already well-represented in town. But his friend convinced him to give it a try, particularly after Rypka's green sauce won first place in the Chronicle Hot Sauce Festival in 2004 and 2005. He knew if he was going to make it, though, he had to sell a product that was different from what was already available. The tacos he came up with riff on Tex-Mex and Interior Mexican, incorporating elements of American comfort food and other regional flavors Rypka was exposed to while working as a chef at the World Bank in Washington, D.C. Think fried chicken, chiles, and cheese with a spicy ranch sauce in a tortilla. Torchy's tacos are fun and flavorful, but not so different that people don't recognize them.

Austin has clearly embraced the concept. In the four years since the first trailer opened, Torchy's has added five more locations, including one in Dallas. Like the Arriagas and Espinosa, Rypka claims to have no master plan for expansion. "In reality, we turn down offers for locations all the time." His strategy for expansion is to take over existing restaurants that have closed for one reason or another. And he thinks a lot of his growth is in response to demand. Despite what some think, "we haven't targeted a single location; they've just come to us. We're not trying to put anyone out of business."

I asked the owners of each restaurant whether they were worried about the competition. All three delivered remarkably similar responses. "It's like the 7-Eleven effect," said Orlando Arriaga, owner of Taco Shack. Tacodeli's Espi­nosa called it the "food court effect." That is, the more choices you have in close proximity, the more business you generate. As if scripted, all three owners stated they believe that competition makes them better.

Orlando Arriaga did admit that he thinks Tacodeli and Torchy's have impacted his business somewhat. But he was quick to add that he's holding his own, and he believes his product is different from others available. His customers agree. "Sometimes I bring tacos to work," said Tracy, a school teacher at Doss Elementary, "and Taco Shack's are everyone's favorite." I asked her what she liked about them. "The bacon is really crisp. ... I don't know, these just have the taste I love." Espinosa and Rypka also feel strongly that they have their own niche within the market. While Taco Shack's tacos are classic Tex-Mex, originating from the foods that Orlando and Yoli Arriaga (both of whom are Mexican-American) grew up on, Tacodeli's are more influenced by Mexico's Interior cuisine. "When people walk in the door, it is up to us to please our customers, and if we are doing the right thing, then they'll come back, even if they go to Torchy's one day and Taco Shack another," says Espinosa. Case in point: Chris, a tech consultant, eats at Tacodeli about once a week. His favorite taco is the Heather, a tortilla filled with grilled queso fresco, refried black beans, guacamole, lettuce, and tomato. When I asked him whether he ever ate at Taco Shack or Torchy's, he admitted that he does like Taco Shack but for breakfast only.

Torchy's also has no shortage of adherents. As Rypka explains, "I think we have a great product, and we take care of our customers." Wyn, a native Texan who recently landed in Austin after living in New York City, considers himself a taco aficionado, and Torchy's is his favorite taco haunt. Great tacos were among the things he missed most about Texas when he was in New York. He loves tacos for their portability and versatility, and he likes Torchy's for its baroque flavor pairings. But he also likes to eat at Tacodeli.

"So far, the market is supporting all three concepts," says Espinosa. Orlando Arriaga agrees. He is excited by the recent interest people have taken in tacos and sees it as a validation for what he and his wife, Yoli, have been doing for 15 years: "We are making the world a better place one taco at a time." 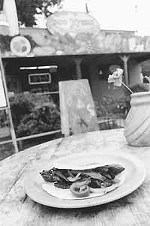