Behind the Scenes at ACL's Austin Eats 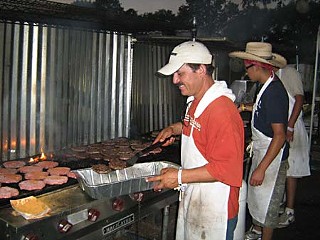 People who attend the Austin City Limits Music Festival are usually too busy walking from stage to stage to pay close attention to the food court. When it's time to eat, they stand in line, wait their turn, get some grub, and go on their way without giving much of a thought to what it takes to put that burger in their hands. The last two times I attended the festival, I spent most of my time behind the scenes at the food court, observing the incredible amount of work it takes to feed the masses for three days. I was on hand to see what these guys went through in years when it was impossibly hot and dusty in Zilker Park. Sure, they have shade and fans to cool them off, but they also have fryers and grills, and they're moving at a frantic pace to keep up with demand. But despite the heat, hard work, and long hours, they try to keep their spirits up, enjoying the festive atmosphere and having some fun amid the chaos, swapping food items and sharing beers in a spirit of pure camaraderie.

Some booths are better equipped to deal with the workload than others, and keeping the menu simple is part of their success. The Salt Lick relies on a large staff of 30-plus people and on food purveyor Sysco, whose sales reps are on-site through the weekend. Even though they bring all their meat ready-smoked every morning from their pit, they still rely on Sysco rep Teri Camp to keep up with the supply of buns, chips, jalapeños, and sausage, which they grill on-site; the Lick also stores hundreds of gallons of queso and barbecue sauce in Sysco's refrigerated trucks.

Since most vendors work with Sysco during the festival, the reps hang out under their own tent, checking inventory on their laptops and carting cases of meats, veggies, and bread from their refrigerated trucks to each booth as needed. "It's a little stressful, but it's a lot of fun," says Camp, who has helped her clients at ACL since year one. This time around, she is also coaching newcomer Bess Bistro through its rookie year.

A few years back, fine-dining restaurants started giving ACL a shot, some with success, others not so much. It's taken Aquarelle three years to get the hang of it. Chef/owner Teresa Wilson got some valuable feedback from veteran ACL chefs: Make something tasty and easy to eat that requires little food cost so it is profitable. "So we came up with the steak sandwiches and hand-cut fries, and we have done well. Our first year we had all the money tied up, invested in equipment, flooring, et cetera. We did not gauge many things correctly, so we ran out of some ingredients. I had to buy mayonnaise from Austin's Best Burger by Sunday," says Wilson.

That first year they went through 50 25-pound boxes of potatoes, 100 boxes of 36 rolls, and 60 gallons of rémoulade. Because the restaurant staff consists of only about 10 people, they actually close the restaurant during ACL, and all hands go to the site, where they work all day long. At the end of each day, they must clean, sweep, drain the oil from the fryers, and take all pots and utensils back to the restaurant to be washed. Bright and early the next morning, they do it all over again. "Our third year will be better," says Wilson. "This time they gave us 20 staff passes, so we'll be able to do shifts. I also bought three fryers so I don't have to rent them ever again."

Italian favorite Vespaio and sister Enoteca participated two years ago for the first time, because "we wanted to see if we could do our high-quality food in a fast-paced setting," says manager Heather Hatley. Turns out they could, and those meatball sandwiches were to die for, but it was not without an insane effort. "We had a blast; it was a totally different environment from our regular workday, but the returns were not worth the amount of work it took us," she confides. "We didn't want to compromise our ethics and the quality of our foods to make it easy and profitable." The sister restaurants had all their main personnel, including chef Ryan Sampson and most of his staff, on-site, but both restaurants were still as busy as always.

Vendors have to spend a huge amount of time preparing for ACL weekend, and when you actually butcher your own hogs to make meatballs, this workload increases exponentially. "We butchered 14 whole pigs, made 400 gallons of arrabbiata sauce, ordered 1,200 pounds of calamari, and based on some bad advice, we ended up ordering too much bread and had to take 800 rolls to the food bank," says Sampson. "Because we didn't use a food purveyor, we had to get our own refrigerated truck, and we didn't reserve fryers, so we had to go to San Antonio to rent them." Aside from all the kitchen prep work involved, "we also had to build our own booth with pallets for the floor, haul and set up the equipment, and then break it down the Monday after. It's just a lot of work."

It is obviously hard to do from-scratch artisanal cuisine in this setting, but Olivia exec­u­tive chef/owner James Holmes is set on frying chicken for his ACL debut. Holmes is no stranger to feeding the ACL crowds, having helped at Austin's Best Burger in the past, but doing his own booth for the first time is not going to be as easy. "Oh it's going to be crazy. ... I usually do about 12 chickens for my Sunday brunch, but I just ordered around 4,000 for ACL. That's a lot of buttermilk and flour!" says Holmes, who is also making a vegetarian item: baked potatoes with okra in creole sauce. "I'm prepping around 400 gallons of creole sauce. It's really kinda crazy."