The party began in October 1810, when a great horse race was organized to celebrate the marriage of Crown Prince Ludwig and Princess Therese of Saxe-Hildburghausen. Everyone had so much fun that it was held again, and eventually became an annual event, dubbed "Oktoberfest" in 1872. It has since evolved into a 16-day Munich blowout in late September and early October.

Oh, to be in that great mass of humanity, dancing to the throbbing polka beats, scarfing down sausage, kraut, and strudel, and most of all, imbibing from the holy grail ... er, stein – it would be a dream come true. A friend who has been there tells me it should be on every beer drinker's bucket list.

However, a trip to the fatherland currently falls outside my price range. Fortunately, that's no reason for a Texan to cry in his beer; German culture, or at least our immigrant version of it, thrives in Central Texas. Beginning in the 1830s, a steady stream of Germans moved into the Lone Star State, most notably settling in enclaves such as New Braunfels, Fredericksburg, and San Antonio's King William District. They brought Oktoberfest with them, and it can still be enjoyed around here in several incarnations. Here are some glimpses of a few notable Oktoberfests in our area, as well as some lesser-known ones. I've also listed a few events that, while not necessarily German-themed, just provide a good excuse to drink beer in the fall.


Have plans for this weekend? Then cancel them, because this event begins Friday and runs through Sunday. And I'm guessing this will be a good one, as it marks its 30th anniversary. I have to pause here and confess shameful ignorance: Although I've visited Fredericksburg several times, I've never attended this venerable event in one of Texas' most famous tourist spots. However, glancing over its website, it appears to follow the standard theme: beer, polka bands, beer, Kinder Park (a children's play area), beer, craft tents, beer, staff (and locals) in traditional Deutschland garb, beer, German food, beer, dancing, beer, and then of course, our Texas twist: Bubbas in cowboy hats. Drinking beer.

Friday night, the music begins right after work in three different dance halls; on Saturday, it starts bright and early at 10am, running well into the night; and Sunday it runs from 11am to 6pm. And I just spotted a photo of one of my favorite acts, Oma & the Oompahs. It's not all German, though – some veterans of the Texas Czech music scene are listed as well, such as the Jodie Mikula Orchestra.

I did mention beer, didn't I? Looking at the photo gallery, I can see some fine German imports including a couple of different varieties of Spaten (in business since 1397), and both the dark and light weissbiers, or wheat beers, from Franziskaner (1363). Good enough for me – maybe this is the year I finally go.


This is the celebration I know best, an annual don't-miss event for me and several other friends who all have kids around the same ages.

And that's the key, what has kept us coming back several years now: We grownups get beer and music, and the kids get carnival rides. Tip: Shell out for the $20 all-day ride pass for the little ones. It might seem steep, but when they ask for money for ride after ride after ride, the financial benefit soon becomes obvious.

While they're off running through the fun house or doing the carousel for the umpteen-millionth time, you're quaffing good stuff like Paulaner or Warsteiner Dunkel. (Okay, you can get watered-down American light beers, too, but for the life of me, I can't understand why anyone would go to a celebration of German culture and not try the real thing – or at least Shiner Bock.)

Another main reason I've attended Wurst-fest so often instead of the Fredericksburg event is the flexibility its schedule offers – rather than a single weekend, this is a "Ten-Day Salute to Sausage," as it bills itself, so I can usually find some way to fit it into my calendar. After you sate yourself with five sausages on a stick, follow it up with the potato pancakes with applesauce. If you have any room after that, there's also Cajun food, funnel cakes, and every bad idea ever fried up at the Texas State Fair (fried Oreos are pretty awesome).

Wurstfest has been going strong since 1961, starting with a modest crowd of 2,000 and now hosting tens of thousands. Since 1967 it has been held in Wursthalle, sited on the gorgeous Comal River just outside Landa Park. Like the Fredericksburg celebration, the music lineup features many stalwarts of the Texas German and Czech music scenes.


"Journey to Bavaria and the Black Forest as the air echoes with traditional German music and dancing," reads the brochure. Okay, as noted above, the first Oktoberfest did not occur until half a millennium after the Renaissance, but nobody ever accused Ren Fests of historical orthodoxy.

The famous/infamous Texas Renaissance Fest­ival is hilarious fun just about any weekend in the fall (it's open every Saturday and Sunday, Oct. 9-Nov. 28, plus the Fri­­day after Thanksgiving). But if you love beer and German food, then opening weekend, when the lords and ladies celebrate Oktoberfest, sounds like your best bet.

There will be a bratwurst-eating contest, a polka contest, and an Alpine yodeling contest. If you're not feeling competitive, then you can probably just kick back and enjoy a stein of St. Pauli Girl Oktoberfest beer with apple strudel, kolaches (wait, those are Czech!), potato pancakes, brats, Black Forest cake, and kartof­fel­salat (German potato salad). As always, you get bonus coolness points for going in costume.


This isn't nearly on the scale of the other three major celebrations mentioned here, but the fun you'll have is almost as big and involves less driving. It's held under a single tent out in the parking lot, and your modest admission charge benefits the YMCA and Central Texas Dachshund Rescue. (You're welcome to bring your dog – in fact, there's a dog costume contest.)

Now in its fifth year, this event has been a success since the start. The reasons are obvious: Chef George Powell whips up a mouthwatering, stomach-stuffing array of German dishes including bratwurst, sauerkraut, red cabbage, pretzels, and cobblers, and you get to wash it down with NXNW's great beer, including a wonderful German seasonal from head brewer Ty Phelps. Seriously – despite being beer-crazy and a big fan of Phelps, I really think it may be the food I love best about this one. Well, that and cute waitresses in dirndls. Plenty for the kids, too: There's always some array of bouncy houses, climbing walls, and face-painting. This year's bands include Oma & the Oompahs and the Sauerkrauts.

Not German, but Still Awesome and in October


For $35, sample more than 50 craft and import brews. With a $50 VIP ticket (only 100 available), you get to start early and get brews not available to the rest of the fest.

These are either new or small Oktoberfest events that sound worthy:


This new Bavarian restaurant out in western Travis County holds its first-ever Oktoberfest this year. I haven't eaten here, but you can check out Rachel Feit's review (see "Dining del Lago," July 2) to get an idea about the food. It has a good selection of brews from Spaten, Franzis­kaner, Hacker-Pschorr, and Paulaner and promises sausage, schnitzel, live polka and bluegrass, and a "bounce haus" for children.


Featured beers include Spaten Oktober­fest, Premium, and Dunkel, and Franziskaner Hefe-Weisse, as well as Riesling wines. Special German-Texan beer boots (traditional boot-shaped drinking glasses) will be for sale, as will German food. Enjoy live music by the Walburg Boys, the Siekers, and the Polkadillos and moon­walks, face-painting, and such for the kids. 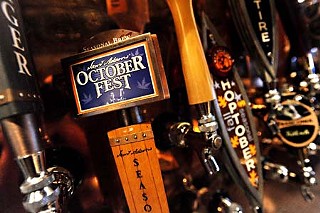 This is one of the bars that led Austin into the craft beer revolution. I've never attended their O-fest, but I'll endorse anything these folks do, sight unseen. Not all the details have been worked out, but it will be 4pm-midnight in the adjacent parking lot. There will be bands, and featured beers include seasonal offerings from Ayinger, Spaten, Franconia Brewing Company, Harpoon, and of course Austin's very own Live Oak (its Oaktoberfest offering is always delicious).


Walburg's Oktoberfest celebration includes live music every Friday and Saturday night in October in its tree-shaded biergarten that's open from 6pm to midnight. There will be an all-you-can-eat buffet, plenty of cold beer, and an arcade for the kids. Never a cover.

While Germany created many varieties of brew, the style most commonly associated with Oktoberfest is Märzenbier ("March beer"). It tends to have a medium to full body, amber color, and a notable maltiness. The name comes from the month when it was traditionally lagered (put in storage), and it matured and was ready to drink by late summer or fall.

Some Texas breweries have taken tasty stabs at this style. I highly recommend these. All are seasonals, so get them while you can:

Saint Arnold Oktoberfest: Breaking from convention, this Houston company actually brews this as an ale rather than a lager. I couldn't care less – it's delicious, whatever it is. The flavor is brilliant, just like the fall leaves on the label.

Real Ale Oktoberfest: Our neighbors in Blanco are on a roll – everything they've tried lately is fantastic. Munich and Vienna malts make for a rich, satisfying drink.

Shiner Oktoberfest: In 2005, its 96th year of operation, Spoetzl Brewery began putting out a series of limited-edition beers to mark the run-up to its 100th anniversary. First in the series was a Märzen named "96," and I was sad when they finally ran out. Thankfully, this toasty-flavored brew has now been revived as a fall seasonal. 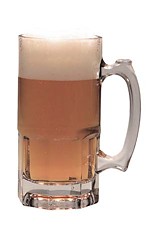 Day Trips
The summer drought is making historical Indian sites throughout Texas more accesible to archaeologists ... and to looters.