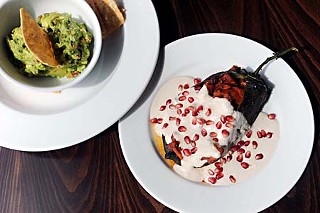 
Mexican food is always a hot topic in Austin, but this year, it's particularly appropriate to pay attention and appreciate the fare – 2010 is the bicentennial commemoration of Mexico's independence from Spain, as well as the 100th anniversary of the Mexican Revolution. We're fortunate that our city contains all manner of eateries representing a spectrum of Mexican foods, from Tex-Mex to Mexico City-style, from hole-in-the-wall taquerias to white-tablecloth fine dining.

A recent addition to the scene is El Mesón Cocina Mexicana y Tequilería, which quietly opened on South Lamar in May. This is a new venue for chef Marisela Godinez, a Mexico City native whose cooking has long delighted a small but hardcore band of aficionados at El Mesón Taquería on Burleson Road in far Southeast Austin. (It's been awarded six Chronicle Restaurant Poll Critics Picks.)

It's a very fine thing that Godinez now has a centrally located restaurant to showcase her enormous talent and deep understanding of regional Mexican cooking. Tex-Mex this is not; diners who expect bottomless baskets of chips and our beloved cheesy enchiladas might be disappointed. But then, they could find themselves pleasantly surprised by fiery yet subtly complex salsas, handmade corn tortillas, and interesting antojitos like quesadillas de huitlacoche ($8.29) and habanero-kissed shredded-beef salpicón, Yucatecan-style ($5.29).

Do yourself a favor and start with made-to-order Monterrey-style guacamole ($5.29). A big bowl arrives full of chopped avocado, tomato, onion, and jalapeños balanced with salt, lime, and cilantro and accompanied by a plateful of perfect totopos – corn tortilla wedges so crunchy and greaseless it's as if no oil was involved.

Another impressive dish from the deep-fryer is tostados de pescado ($7.50), smoking hot cornmeal-battered tilapia filets on crispy corn tortillas with rainbow coleslaw and piquant chipotle aioli. Billed as an appetizer, it's enough for a meal.

The moles of Mexico are vast and varied; we in the U.S. tend to forget there are many more than the ubiquitous brown mole poblano. Godinez does a nice job with two others; if you're a mole fan (or want to become one), try the chicken in Hidalgo-style red mole or the unusual mole verde ($8.79) made from toasted, ground pumpkin and sesame seeds, serrano chiles, tomatillos, and fresh greens.

The most expensive menu item ($12.95) is an astonishing chile relleno unlike any I've had before. A dried red ancho pepper is stuffed with Monterrey, Cotija, and goat cheeses; pine nuts; and dried cherries. It isn't battered and fried, and it's dressed in tomatillo cream sauce. It's a deftly coordinated dance of flavors and textures – simultaneously spicy, sweet, tart, crunchy, chewy, and creamy.

Desserts vary daily; I've enjoyed a classic flan ($4) and a lovely dense cheesecake topped with burnt caramel sauce ($5). I was less entranced by the natilla ($4), a rather bland vanilla pudding, but I loved the accompanying Mexican wedding cookie. And the bar offers 40-plus tequilas served as shots, margaritas, and Mexican martinis, as well as Mexican and American beers and a few other basic cocktails.

The transition from small, self-service taqueria to a five-times-larger restaurant venue hasn't been without issues. Service can be uneven – with some exceptions, servers seem overextended and undertrained. The air-conditioning isn't adequate to maintain optimal temperatures. The place is cavernous with very high ceilings, and – while the stone walls, tile floors, and bathrooms are beautiful – the dining areas feel rather spare and impersonal. Most importantly, when the chef isn't in the kitchen, the difference is noticeable (once I was served flimsy commercial chips instead of the divine totopos!). But these glitches are fixable, and I assume they will be taken care of. The food here is too exceptional to not be fully supported by consistent service and comfortable ambience.