1991: First year of The Austin Chronicle Hot Sauce Festival, we challenge San Antonio, and it's a tie until John Randall's sauce is declared Best of Show and Austin is declared the winner. Two hundred sauces entered.

1992: Awards are slow to be presented because we had a calligrapher filling out each individual certificate. What were we thinking?!

1993: Chile Pepper magazine proclaims us the "world's premier hot sauce contest" based on our attendance and number of hot sauces entered. Don Walser's Pure Texas Band plays the festival for the first time. 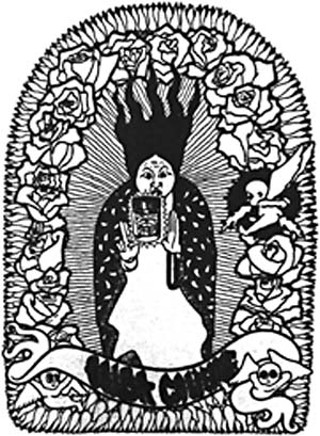 1994: We can afford etched glass trophies. (Thank you, Renaissance Glass Co., for 17 years of beautiful trophies.) We officially proclaim ourselves the largest hot sauce contest in the world! Three hundred and fifty sauces entered.

1995: Protests are threatened over hot sauce art, which is a depiction of the Virgin of Guadalupe. Our largest crowd ever at the Travis County Farmers' Market! Unfortunately, we need to find a new home.

1996: We found a new venue, but for one year only – Central Park (in front of Central Market on North Lamar). The remnants of Hurricane Dolly come through Austin bringing drought-ending rains. People are so happy they won't leave! After an hour of a nonstop downpour, some people decide to leave, but as soon as the rain stops, people pour back into the park! Luke Zimmermann (Ruby's BBQ) and Louis Black (Chronicle editor), along with other staff, stand in the pouring rain and keep selling beer and food tickets to soggy patrons. The rain couldn't dampen anyone's fiery-hot passion to be there.

Noshers at a tasting table in 1997 (Photo by John Anderson)

1997: We found a new "permanent" home: Waterloo Park! Don Walser is still playing our event and looks fabulous under the giant live oak on the northeast end of the park. We start the People's Choice Awards for the commercial bottlers, and Nick Barbaro (Chronicle publisher) does an incredible job keeping ballot-stuffers from skewing the results. Texas Fiery Food Show's first year in Austin on the same day as our festival. Imitation is the sincerest form of flattery, we suppose. It doesn't last.

1999: Founder and head judge Robb Walsh moves to Fort Worth to become editor of Chile Pepper magazine, but he keeps coming back! We move the bands (A-Town Wags, Los Pinkys, Don Walser's Pure Texas Band) out from under the trees and onto a real stage!

2001: Dot-com bust hits, and all the computer geeks join the slackers in the park for free music, chips, and hot sauce. Celebrity judges learn they shouldn't belittle the preliminary judges who start including the worst sauce of the day in the celebrities' samples. 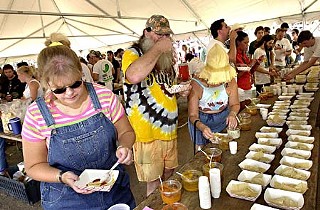 2003: The Derailers perform. Bryan Beck and the Fabulous Judy pitch in to sell merchandise for the band and get completely overwhelmed. Our first judge from New York City: Michael Lomonaco (for a show on the Travel Channel)! Can't understand why he never returned?!

2004: Two people agree to be preliminary judges and write articles about it – one in the San Antonio Express-News and the other in Fiery Foods & BBQ magazine. One judge's mouth doesn't stop burning until halfway back to San Antonio; the other can't get enough and goes over to the park. Little wonder he owns Tears of Joy Hot Sauce Shop!

2005: Bryan Beck of KGSR is proclaimed "Emcee for Life." This is the first year we have roving drink sellers who help keep people stay hydrated while they stand in line. Needless to say, they are very popular.

2006: After 11 out of 16 years of judging, Miguel Ravago makes this his final year and moves to Europe. We miss his style, grace, and professionalism. We try out a separate pico de gallo category, which lasts a couple of years and then goes away.

2007: After a hiatus from judging commercially bottled sauces, the celebrity judges start picking winners in this category again. After all, they weren't eating enough hot sauce up to now. More than 400 sauces entered. 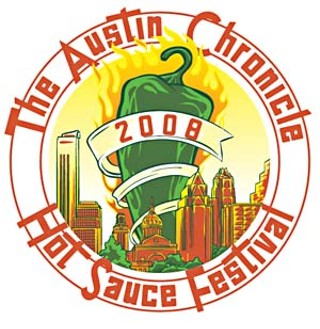 2008: We can no longer serve homemade sauces under the tasting tent unless they've been made in a commercial kitchen. Fears this could hurt the event are completely unfounded! Five hundred sauces entered. Tomatoes and peppers blamed for salmonella illnesses in the country. Fortunately, the culprits are found and all is right with the hot sauce world again!

2009: Added a demonstration tent, which is presented by the Texas Culinary Academy (now Le Cordon Bleu College of Culinary Arts). It's a huge success and not just because of the chairs, fans, and shade! After a streak of 68 days over 100 degrees, we have a "cool" day of 95 degrees and a breeze for the festival! Life is good!

2010: New members inducted into the Hall of Flame. Carlos Contreras, Henry Alvarado and Fred Alvarado, otherwise known as the El Paso Connection, will once again anchor the preliminary judging table as they have for the past 20 years! We bring in the most food yet for the Capital Area Food Bank of Texas, right?!