A few stories from 'The Austin Chronicle' Hot Sauce Festival The Making of an Individual Contestant: Four Repeat Offenders Talk About Hot Sauce

Twyla Wick loves to cook. "In fact, I think my husband thinks I cook too much," she confesses. A psychology student at the University of Texas, Wick works during the day for State Farm Insurance to put herself through school. But what she really dreams about is opening a restaurant or commercial food business. If the results of last year's Hot Sauce Contest are any indication, she just may have some success. She took first place in the individual red sauce category in her first time entering the contest.

Other contestants are not so lucky. "I am always the bridesmaid but never the bride," jokes Brent Kirby, who's been entering the Hot Sauce Contest since 1997. "In 1999 I received an honorable mention for my red sauce, then I took second place for red in 2001 and 2002." He's never won first place but perseveres nonetheless. Why? "I love fresh salsas. I love their versatility, and they are healthy. You can substitute watermelon or other fruits for tomatoes to make terrific dips and marinades." For Kirby, cooking is a creative outlet that his job running a video court-reporting business doesn't allow. And the validation of knowing people love his food is a big part of the appeal.

Barry Hoelscher feels the same way. An accountant by trade, for years he's been making hot sauce for people at work or giving jars to friends and family as gifts. His friends and acquaintances love it so much they've encouraged him to bottle and sell it. He's been entering the contest for 12 years. His green sauce of roasted tomatillos and green tomatoes won second place in 2002 and third in 2007, while his red sauce won an honorable mention in 1999. "I'd like to win [first place] for the recognition, and it would make me really proud," he says.

But it's not really about winning. What Hoelscher, Kirby, and Wick all have in common is a passion for cooking and a yen to one day pour that passion into a full-time career as a commercial bottler, caterer, or restaurateur. They're not the only ones. In fact, the devotion to cooking and the aspiration to build a business in the food industry pervades the mentality of many of the 200-plus contestants who enter each year.

Michael Rypka should know all about that. He's a longtime contestant who followed his dreams after back-to-back wins in 2004 and 2005 in the individual green sauce category. In 2006 he started Torchy's Tacos, a taqueria that has been a consistent Austin favorite for its delicious salsas and queso, among other things. He first entered the Hot Sauce Contest when he moved to Austin from Houston in 2002, and though he didn't win that year, he was hooked on the idea of a festival devoted to fiery foods in the middle of a Texas August. Though Torchy's has since placed in the restaurant red sauce category, Rypka still enters in the individual categories. An avid experimenter, he sees the Hot Sauce Festival as a sort of proving ground for new sauces that he may use in the restaurant.

"Winning certainly has given me some confidence to start talking to people" about entering the food industry, says Wick. Though she entered the contest on a whim last year, she says this year she has the fever not just to win, but also to turn her love of cooking into a career. So does Hoelscher, who's even started thinking about business cards for the commercial salsa company he wants to create. And Kirby also admits, "starting a bottled salsa company is always in the back of my head."

But even if they don't win, and even if their love affair with cooking never materializes as a career, contestants like Kirby, Hoelscher, Wick, and even Rypka enter year after year because of the never-ending possibilities. 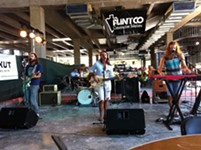 19th Annual 'Austin Chronicle' Hot Sauce Contest
If you didn't make it to the fest to sample salsas, take this list of winners to the grocery store