The birth of a celebratory cheese Whole Foods Market turns 30 years old in September, and there'll be lots of partying going on. Not least in the celebration is the creation of two new cheeses to commemorate the anniversary and honor the craft of cheesemaking.

Last April, I accompanied Strange as she "followed the milk" that would become one of the new cheeses, Buckaroo from Cowgirl Creamery. We began with the cows of Straus Family Creamery in Marshall, Calif., and – just behind the milk truck – traversed Marin County to Petaluma to watch Cowgirl Creamery perform the magic that transforms milk into cheese. 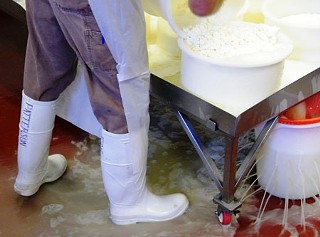 North of San Francisco on Tomales Bay, Marshall may not be the loveliest spot on earth, but it's near the top of my list. On a spring morning, breezes ruffle green grass and yellow flowers blanket rolling hills; the sky and bay compete for the deepest blue. No road noise drowns out the birdsong and rustling leaves or the distant lowing of cows ready to be milked.

I wait by the gate to Straus Family Creamery; there's no sign identifying this California institution, famous for milk and a multigenerational commitment to sustainability and land stewardship. Bill Straus began farming here in 1941 with 23 cows. From the 1960s, Ellen Straus was a tireless environmental activist, co-founding Marin Agricultural Land Trust, the first in the nation. In 1994, under son Albert, the business became the first certified organic dairy west of the Mississippi, and 90% of its electricity is generated from a methane digester. "We're powered by the poop," says Albert Straus. We hurry to the milking sheds to observe 260 milk cows queue up (they know their places) and, 14 at a time, purposefully head to milking stations. Electronic sensors identify each cow and record milk amounts and characteristics. Afterward, the ladies rest in a shady holding yard and, ahem, provide material for the methane digester. Then they amble to hillside pastures to graze.

Albert Straus and farm manager Harley Wagenseller explain feed composition and silage (fermented grasses), how the methane digester works, how cows rotate through pastures. In airy red barns, there are lots of calves looking for head­ scratches and fingers to suckle. There's nothing sweeter than a baby cow and few places are more compelling than this peaceful farm, but the milk is already headed to the cheesemakers, and we must hit the road, too.

The highway east to Petaluma curves through stunningly beautiful farmlands. These verdant fields and pastures exist partly due to MALT's efforts to preserve farmland in trust for the future. This rich agriculture greenbelt won't become housing developments, thanks to the legacy of Ellen Straus.

Petaluma is a thriving little city around a slow river (like a smaller, gentler Austin) and was once famous for chickens and eggs. Cowgirl Creamery is in a revitalized warehouse district by the river, cheek by jowl with cafes, urban housing, and small food companies. We view the Straus milk truck discharging its contents into a holding tank, from which it moves into the low (150 degrees Fahrenheit) and slow (30-minute) pasteurization process.

Once inside, you're hit by a heady aroma – the cool air is redolent of cheese. The second noticeable thing is gleaming cleanliness and stringent anti-contaminant measures. Cheesemakers wear white smocks, jaunty white caps, and the white rubber boots favored by Gulf shrimpers. We suit up in smocks, hairnets, and plastic shoe covers before touring the two enormous vats where coagulation metamorphosis begins, rooms for maturing cheeses, and finishing areas where cheeses are hand-wrapped and packed for transport. It isn't a big place, and there are only a handful of busy workers.

Sue Conley and Peggy Smith began Cowgirl Creamery in Point Reyes Station in 1997; it's well-known for making small batches of prizewinning organic soft cheeses like Mt. Tam and Red Hawk. The success is "due in great part to the quality of the milk and to our simple approach," says Conley.

For the Whole Foods anniversary cheese, Strange envisioned something completely different from Cowgirl's signature soft cheeses, so the cheesemakers created a mild, whole-milk, washed-rind cheese. For two months, each wheel is turned by hand and rubbed with a weak saline solution (see the Buckaroo cheesemaking process at www.wholefoodsmarket.com/video). The result is a firm, ivory cheese remarkable for flavor and versatility. "The idea was to create a cheese that's really good for cooking," says Smith. Strange describes the taste: "The lactic creamy flavors of the milk come through, with just a little complexity around ... some floral background." Spoken like the avid cheese lover and cheese professional that she is.

The Whole Foods anniversary cheeses – Buckaroo from Cowgirl Cream­ery and Lil' Ziggy from Cypress Grove Chevre – debuted in Austin Aug. 17-18 with the cheesemakers on hand. They'll be available in Whole Foods stores around the country in September. 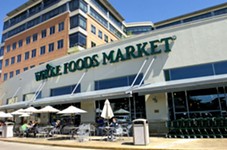